After the Peak, I got home, we packed up the car, the kids, the dog and we were off to the mountains!!  Woo Hoo!!  Discovered an important factoid about Iz on the drive:  watching a movie on curvy Berthoud Pass is a bad idea:(
We spent quality time in the arts and crafts building, walking around, eating, reading, and Charlotte's new favorite:  puff puff golf!!  We hit the course twice in a couple of days and had an absolute blast....I'd lead off, Iz would follow, then Charlotte, and Michael would get a shot off.  Then the girls would take all the balls and put 'em in da hole - we made par every time!  And Char would say I win, I win (competitive???). 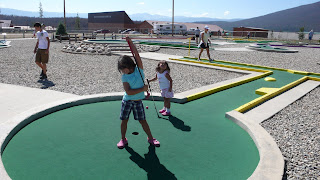 Yep, they're rock stars
The highlight of the trip was our horse back ride to dinner for Charlotte's 3rd (OMG 3!!!!) birthday.  And she wanted to ride with me - my lucky night!!!  Our horse's name was Studley and apparently he was the horse in Dumb and Dumber, that's right a movie star.  And, he acted like it too.  He had a great time testing me......I wasn't supposed to let him eat and had to pull up on him each time he did.  But when I did this I squished poor Charlotte and she would cry. The wrangler (?cowboy?) finally tied up his lead so he couldn't eat and things got better.   Iz rode her own horse Scar and did great. 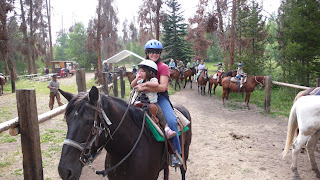 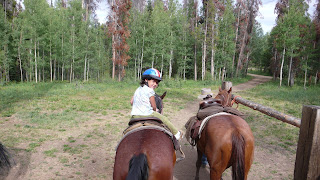 Iz and Scar
We went on a great hike to the waterfall before we left on Wednesday, it was longer than we thought but the girls and Primo were troopers!  Check out these pics..... 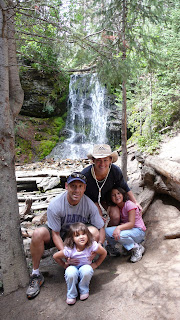 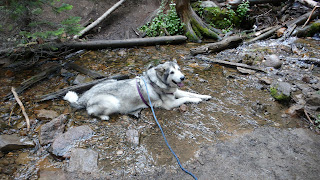 Primo cooling off in the stream
This trip also served as an "active" recovery from the race.  I went for a nice run on Tuesday on some trails and am now a bit concerned about the next event:  Pikes Peak Ascent.  Hmmm, 13.1 miles straight up a mountain.  Who's idea was this anyways?????
Posted by Michelle at 8:49 PM