My apologies for the long post but it is really hard to summarize such a stellar weekend! 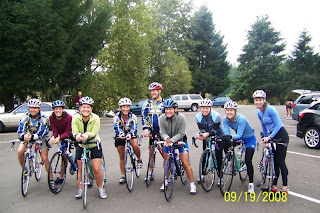 Practical Coaching on bike recon Friday
OK, I have to start even before leaving for Portland.  Going into this race, I was initially pretty nervous.  It really started last week, I couldn't sleep, was completely freaked out about getting sick, and was just kinda nervous.  Beth and I analyzed the start list of our age group, and frankly, we underestimated the  competition.  But that didn't help my nerves.  So I took a step back and realized it didn't matter who was on that start list.   All I wanted to do was have a good.  No, I wanted to have a GREAT race.  I also knew that if I did have a great day, I would have a solid race and a pretty good shot of qualifying for Worlds.  That is a pretty nice bonus of having a great race!!  So, I started to relax and got pretty calm.  As in, no butterflies.  No real stomach distress.  And I started sleeping pretty well.  And, of course, I continued to eat like a freakin' teenager. 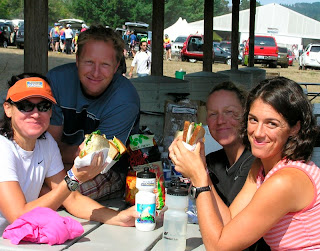 Hmmm, surprise.  Me, Tyler, Noell, and Sonja eating!
So that's how the trip started, strangely calm.  Which is a GREAT thing.  Sonja (PIC) and I were on the same flight out and we just did our thang and traveled really well together.  It was especially fun to think about the last time we were in Portland together....we had literally met like a week before last year's Nationals and decided to room together (best decision EVER).  She came to pick me up at the airport and that was the start of a beautiful friendship.  We were both newbies to Nationals, and it was Son's first Oly distance tri - at Nationals!!! Brave girl!!!  Anyway, we met PC teamie Noell in baggage claim in Portland, and Tyler came and picked us all up.  We were off!! 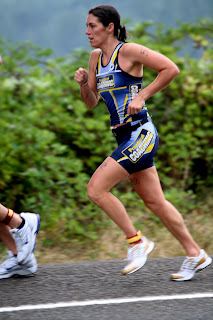 Sonja running down her age group
The major fun of the day you ask??  Heading to the Nike campus in Beaverton.  OMG.   Sonja's friend Myra works at Nike and she took us on a warm-up jog around the campus trail.  I'm sure she was surprised at how slow we were (umm 12/min miles anyone?  These people are going to Nationals??) but it was incredible.  It is the most beautiful corporate campus I have ever seen, the buildings all had names like the Lance Armstrong Center, Mia Hamm building, Tiger Woods building etc.  Oh, and the coolest track - imagine your every day, regular ol' track, put in a lush green forest in the middle of it and surrounding the track, and that's the Nike track.  Amazing.  I do have to mention green shorts stalker dude, he followed us everywhere:  the trail, the track, and the long soccer fields.  Pretty sure he was checking out Tyler.  Then we got to shop at the Nike Employee Store.  Yep....very cool. 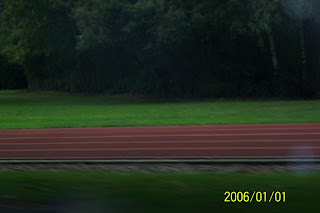 The Nike track as taken from a moving car
The Practical Coaching team turnout for Nationals was amazing:  Steve, Andrea, Beth, John, Sonja, Tyler, Noell, Jenna, Julie, Anthony, and Barry.   And the 4 greatest supporters I have ever encountered:  Priscilla and Michelle, and Sonja's parents Eric and Helen.  Having all of us together at this event was exciting and downright FUN.  We push each other each and every day in training and have the opportunity to share the good and not so good in training and just everyday life experiences.  My peeps:)
Friday morning rolled around and it was time to head up to the race site (Hagg Lake) to hop on the bikes and preview the course and packet pick-up.  It was just as I remember it....hilly.  Up and down and no real flats.  The run course is tough, 3 hills on the way out and 4 on the way back (I know, the math doesn't really work out but trust me on this one).  Swim course looked great and I was ready to get going.  Still calm at this point which is something new for me. 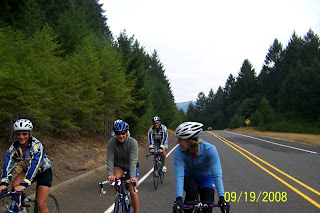 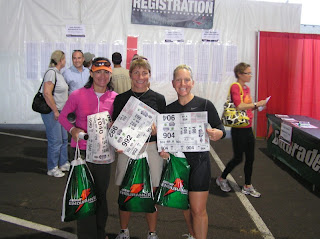 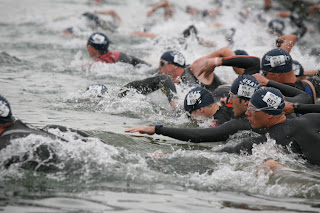 Not my swim start wave but an awesome picture taken by Eric Willis
The swim had a great start: we lined up on the dock, sat down, and with 1 minute before the start, we got in and held onto the dock.  The horn went off but we had nothing to push off of, just let go and got a move on.  I tried to get out in front but in a controlled and non-sprint manner.  About 200 meters in I looked around and was still surrounded by women.  Rather than freaking out and thinking I was out of my league, I smiled.  Yep, I smiled in the water and said to myself, GAME ON.  This is gonna be fun!  By the first sighting buoy, the crowd had thinned out and there were maybe 8 of us with 1 or 2 clearly in the lead.  I settled on some feet for a bit (let's just call her Maria) but I kept hitting them and decided to swim next to her and in another girls wake.  By the turnaround I was swimming next to Maria, stroke for stroke.  I have never done this during a race before and I loved it.  At the next turn I saw another girl that we were catching (call her Alma), Maria saw her too and we went after her.  We were catching the wave in front of us (and yes, I admit, I swam over a guy, but come on this is nationals no time to be polite and/or nice!!!!) and even saw some swimmers from 2 waves up.  There were 3 of us now swimming together and pushing.  Alma tired a bit before the last turn into the dock and Maria and I dropped her.  I had no intention of being dropped by Maria, so we continued to swim next to each other to the end.  We both hit the mat at the same time!
21:31 swim time, tied for 3rd out of the water
T1: 2:05 (Maria 2:21 hehehehe)
Trust me, I was not going to let Maria beat me into transition.  I hauled ass up the boat ramp and into transition.  No major issues.  Helmet on, glasses on, goo in pocket.  Outta there.
Bike
Brrrr, it was cold starting off on the bike.  So I went like hell to try to warm up, and because, well, it was time.  I wanted to have a good strong ride.  I wanted to push the bike to where I would question whether or not I could run.  And I felt good.  My legs were ready to rock and roll.  I rode in my aeros pretty much the entire ride, even on the downhills where I normally hit my drops. I was passed early on by a couple of women in my age group that were very fast so they went on ahead.  But then Alma passed by me on a downhill and then had the nerve to slow down on the uphill.  Uh uh.  So I passed her on the uphill only to get passed again on the downhill.  Cat and mouse for awhile.  Finally, she pissed me off by not relinquishing her position on a pass and I was afraid of getting a penalty so I stepped it up and passed her for the last time.  It was about this time that I forgot where I was on the course.  I know, it's funny how race brain works but it's true.  I literally could not remember if I'd done the big hill twice and if I was on my second lap (I had and I was).  That was a strange feeling but then I saw the runners on the course and knew that I was in my final three miles on the course.  My legs were feeling the push on the bike but I was ready to transition.
Bike: 1:12:15 (20.6 mph ave. on a hilly course!) 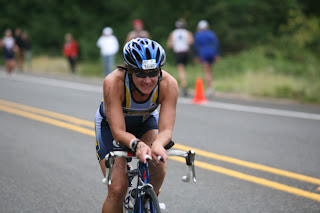 Coming into transition, apparently pretty happy about it
T2: 1:00 Toes were a bit numb from the cold and struggled with my shoes for a couple of seconds but no major issues.
Run
Heading out, I kept telling myself, start calm, relax, concentrate on form, and then push.  but it is so difficult to stay relaxed coming out of transition and everyone taking off like a shot around you.  But I managed to not blow myself up and settle in.  Feeling started coming back to my toes, I heard all of the cheering, hit a downhill and all was well.  After the first hill, Steve caught me and had some very encouraging words as he went by.  Another girl from my age group went by and I made a mental note to catch her after the turnaround.  And then came Alma, she said hey or something to that effect as she went by on the downhill and we played our cat and mouse game again on the uphills/downhills.  I had to let her go right before the turnaround because I was afraid of blowing myself up.  Finally, I hit the turnaround at the bottom of the three hills and it was time to head back and see what was left in my legs and lungs.  I tried working with a guy from the wave ahead of me, he said let's go so I went but he didn't come with me.  I passed Trista on the second uphill and she said hey, let's work together (really not sure how she put all those words together, I was reduced to grunting at this point), you pull the uphills and stay on my shoulder for the downhills.  OK.  I am in.  She pushed on the downhills and I stayed right on her shoulder.  It was great working with her.  She wanted to catch another woman in front (once again she is talking, me - grunting) of us who had passed me earlier and I tried to stick with her but not this time.  Coming into the finishers shoot was just unreal: lined with people cheering, hearing my name over the loud speaker, and crossing the finish line.  I looked at my watch and saw a number that I could not believe.  2:23.  Holy crap.  I was exhausted but elated.  What a great race! 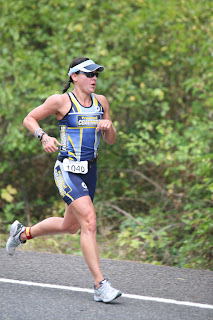 This was the final stretch of the run, Trista is a few steps ahead of me 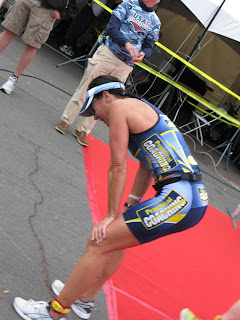 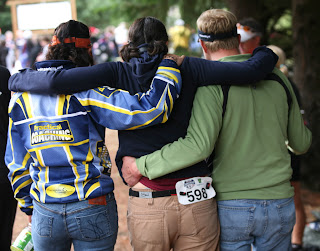 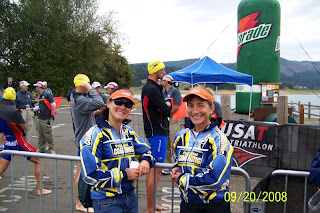 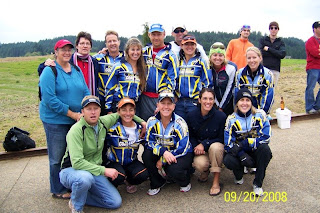 Relaxing after the race 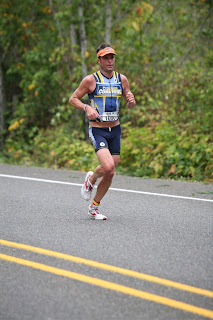 StevieP Coach Extraordinaire.  Seriously folks, I call him that for a reason.  He is truly a great coach and has helped me realize my abilities and achieve my goals.  Thanks Steve!
Posted by Michelle at 9:02 PM

Congratulations Michelle! You are a force to be reckoned with! I look forward to learning from you in the off season!

Nice race report PIC! Way to knock it out of the park. Now, onto fundraising, how on earth are we going to get ourselves to Australia??

Hey girl! I loved your blog! You are SOOO amazing! It is great to see all your athleticism coming out! I loved all the pix! It makes me want to add 100 more to my blog! My fav was of the 3 of you guys walking away. Really cool. Damn I hope I get to go to Aussie land with you! Bethie

Very proud of you and to see your year end so well. I was most proud to see you move and shake on the bike and run like you did this year. Keep the effort up and it will be fun to see where you go. Great job, and I agree Michael is the MAN!!!! BOOOO YAAAAA

I agree with youI also like nike outlet stores very much.