Well, it's time to let the proverbial cat out of the bag.  I have committed to something big.  Like almost can't believe I said yes big.  And I'm freaking out just a little bit about it.  Only a few people know about this adventure because sometimes when I take something on that seems too big I don't talk about it.  Not to mention the "are you crazy" comments and "what is wrong with you" statements that I want to avoid because this one actually fits both of those. 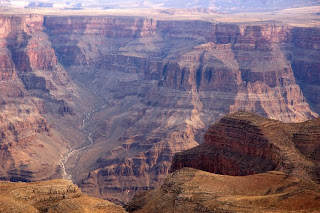 Grand Canyon
In a little over a week, I will be joining a few team mates and friends in running the Grand Canyon.  Rim to rim to rim.  R2R2R.  Approximately 47 miles and 11k in total climbing.  Give or take 14 hours.  And 2 days after my first tri of the season.
I have never even seen the Grand Canyon!  But I am truly getting excited for this.  It is not a race but a true adventure!  How did this come about?  PIC (naturally) has had this particular adventure on her list of things to do and since we are racing in Vegas, a mere 5 hours away, it seemed like the perfect add-on to an already fun-packed weekend.  I never thought Michael would say OK, but sure enough, a couple of weeks ago he signed on.  Thank you Michael!
So here's how the entire weekend looks:  pack up the family car (a la Griswold style) and drive to Henderson, NV.  About an 11 hour drive.  Hang out with the Waltons and Wiecks in the family house in Henderson.  On Saturday, race the Rage in the Sage.  I am the wimp of the group as I am only doing the Olympic distance.  Sonja and Tyler (and various others) are doing the Half. Saturday afternoon family bar-be-que at the house.  Saturday night adult night in Vegas where we will see Zoomanity!  Sunday, pack up and head to the GC.  Monday, up around 4am to start the trek.  Tuesday, drive back to Denver!
"There is a prospect of a thrilling time ahead for you."  That was the fortune in my cookie from dinner the other night and that statement couldn't be more perfect.  There IS a thrilling time ahead of me.  There were also a bunch of numbers on the fortune too and I'm playing them in Vegas!
Posted by Michelle at 8:20 AM

I am excited for you all to have this adventure and I think that you will do great. We are excited for the trip and look forward to racing together.