I know, I know, it's been a long time in getting this post up. All sorts of stuff going on both good and not so good including but not limited to having 3 out of 4 family members puke in the last few days and yes I was one of them.  But since I really don't want to write about the copious amounts of vomit I have seen lately, I am finally sharing my report!  Oh, and since I have been laid up - I have taken the "easy" way out and just posted videos directly here without the benefit of editing, sweet effects, music etc.
After our great race day in Henderson and a fun night on the strip Saturday night, we were off on the next part of our big adventure...the Grand Canyon.  Michael, the girls, and I had never been there so it was going to be an adventure and fun for all.  For me, it was definitely an adventure.  For some reason, it sounded like a good idea to run R2R2R (south rim to north rim to south rim), lots of climbing, lots of descending, and a great way to actually experience the GC.
Of course, as soon as we got there and looked over the edge, I nearly had a heart attack and turned around for home.  Oh holy moly!  It didn't help that the girls ran full speed ahead towards the edge.  THE EDGE.  Yes, I know, there is fencing around the lookout point.  But really, it is just fencing and I seriously thought I was going to lose it. 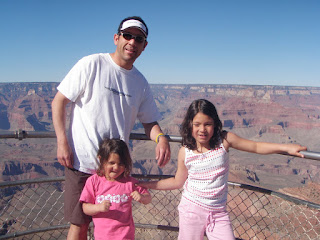 Michael, Charlotte and Isabelle at the edge.  I am literally shaking as I took this picture.
We checked into our hotel and met up with the rest of the gang and started getting ready for the day ahead.  I woke up at 2:10 (5 minutes ahead of schedule) and got ready to go.  The group had decided to leave in waves:  Andrea first around 1, me and Keith next at 3 followed by Sonja and Dave at 3:30,  Steve and Anthony started at 4.  Oh man it was dark!!!  Absolutely no moonlight but it was warmer than we thought, around 35, and really just perfect. 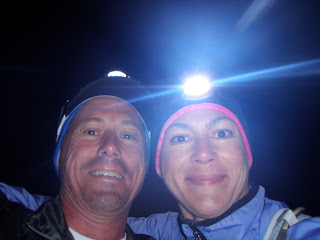 Keith and me at the start of the day
I led off setting a very conservative pace....in fact we were fast walking more than we were running.  It was steep and I knew that my knees were my limiting factor for the day, if I could make it down without too much stress and strain I would be OK.  All of a sudden we were at Indian Gardens and on the edge of the horizon, the sun was coming up.  A quick potty break and we continued on.  It was so peaceful in those pre-dawn hours, listening to the water, the sounds of my feet as I ran along, hearing different animals (not sure what they were!), it was a surreal time of the day.  I'm actually very glad we left when we did......first of all I couldn't remember any of the terrain for the way back up and secondly, I couldn't see over the edge!!! 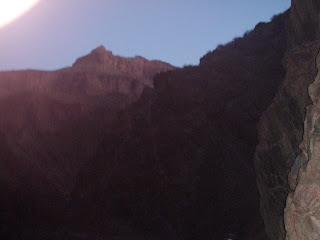 Sunrise almost to the bottom of the canyon
I heard some talking behind us and sure enough, there were Dave and Sonja!!  We all ran down to the Colorado River and were just giddy when we got there.  The color of the river was green, not brown as I had been expecting, and I thought a swim would have been nice:)  Next up was Phantom Ranch, I believe we were around 9 miles in at this point.  We watered and fueled up and got ready for the next "chapter", the box canyon. 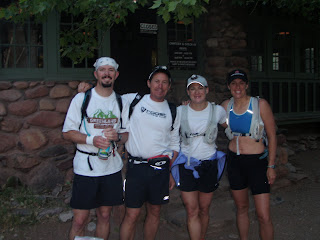 Dave, Keith, me, PIC at Phantom Ranch
The box canyon was all that it was cracked up to be....stunning scenery.  Canyon walls on either side of us, the creek roaring down next to us.  Everyone was feeling great at this point, the pace was good and I was smiling and laughing.  The milestones after the canyon were Cottonwood, Ribbon Falls, the water crossing, Ranger Station at Roaring Falls, and then onto the North Rim. After the canyon, I felt what I was hoping to avoid:  my knees.  And I had promised myself that I would turn around if started to hurt.  So even though I felt great otherwise, I had a decision to make. 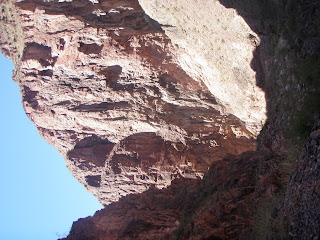 Just turn your head to left a bit.....this is the box canyon 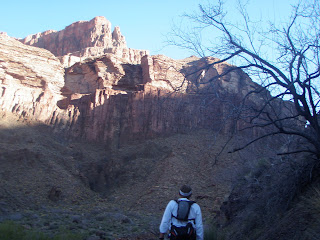 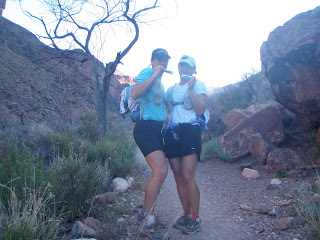 Nuun tabs are the bomb! 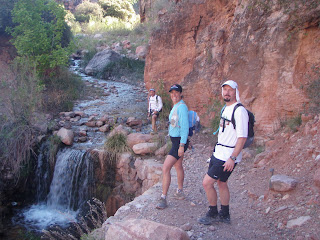 Water crossing - clearly not an issue!
We made it to Cottonwood and then climbed onward. I cannot begin to describe how gorgeous the day and the scenery was....and it's even hard to put into pictures. At Roaring Forks I left the group knowing that I was only half way done and 18 miles in....and would likely be on my own the rest of the day. But it was OK and I really never even thought twice about turning around. I was now on my own to enjoy all that the GC had to offer! As I started back, I realized how much climbing we had done. It didn't seem like it at the time but there was some pretty steep terrain and my knees were screaming for mercy. If it was too steep, I'd walk and as soon as it flattened out a bit I would run. It worked out great and I ran more that I walked. 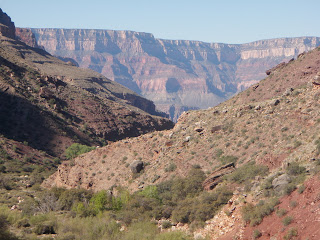 On my way back, I didn't focus on the fact that I had to go all the way back up!
The next couple of hours I had a blast!  There were all these running geckos (lizards) that kept me company on the trail and I tried not to crush them.  My nutrition and hydration were going reasonably well and I was looking forward to the candy the Phantom Ranch cantina had in store.  And, I was starting to see more people on the trail so I'd wave and say good morning.  I'd also stop every once in awhile just to take in the scenery.
My apologies for the Blair Witch-y video... 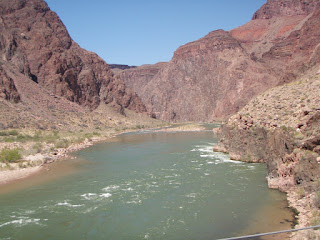 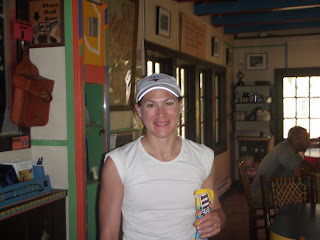 M&M's at the cantina.  Yum!
I reached the cantina and found one of my favorites....M&M's and proceeded to wolf them down, they seemed to hit the spot (for now).  I mailed off a postcard to my parents and headed out.....and who did I see???  Dave!  Great news, I had a partner for the remainder of the trip!  His achilles started hurting shortly after I left the group and he made the decision to turn around too.  Kind of funny though, because he couldn't really run the uphills and I couldn't really run the downhills so after awhile we just settled into an aggressive hike!
After crossing the suspension bridge it got HOT.  As in probably over/around 100 hot.  We were still maintaining an aggressive pace but mid-way through the first set of switchbacks I stopped in some shade and realized that I wasn't doing so great.  Those awesome M&M's were begging for a reappearance, I was sweating profusely, and my heart rate wouldn't calm down. So, we hiked slowly!  After that, I would cool off at every water crossing we hit - feet, head, whatever I could get wet.  And then, before I knew it, we were back to Indian Gardens.  Only 4.8 miles to the top from here, but when I looked up it may as well been another 15 miles.  At this point I was about 32 miles in, my legs were hurting and tired, and it was still hot hot hot!  I am really grateful that Dave and I were keeping each other company because this would have been seriously difficult had he not been there laughing and joking with me.
Delirium stage you ask?  If you consider having a conversation about making sunscreen from hippo skin and mule poop then ummm, yeah, we may have been a bit delirious.  Huh.  And really, that last 1.5 miles???  Took forever.  For.  Ever.  But we did it, we finally came to the last tunnel and decided to run the 1/4 mile in.  36 miles.  12 hours.  And then we were done.  At the top.  Amazing.  And that's why this post should actually be named R2AR2R (Rim to Almost Rim to Rim). 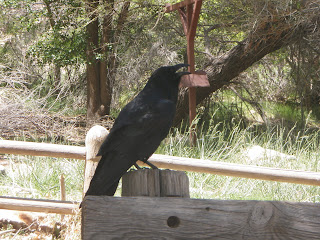 The black bird of death at Indian Gardens.....I reminded him that I wasn't dead yet I just kinda looked like it 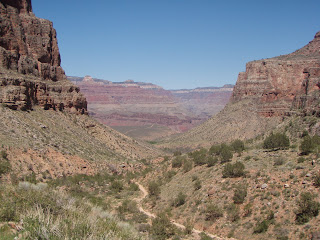 The view coming out of Indian Gardens 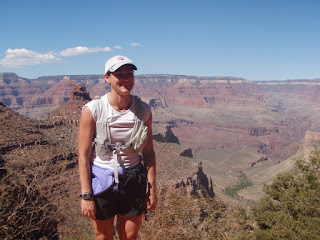 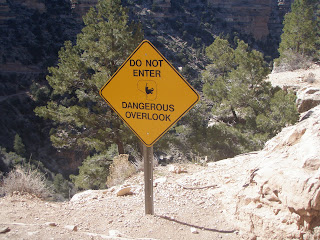 Yep, that says it all doesn't it?
I reunited with the family and sat down.  I knew I was in for some problems with my feet but didn't want to take my shoes off yet.  And then we waited for the rest of the group to arrive: Sonja and Keith came in strong, Andrea aka "rockstar" arrived shortly after that, and then the boys.  We watched the sunset on the Grand Canyon and decided to clean up and get some food. 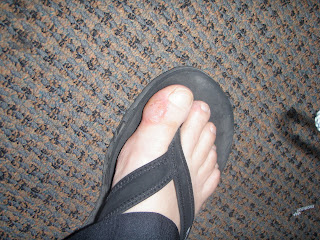 The aftermath - the blister on that toe was almost as big as the toe itself! I had no less than 3 blisters on each foot. 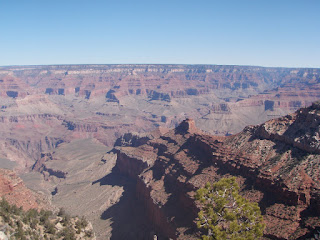 Almost a week out of the experience now and I am extremely proud of what me and my teamies accomplished.  It was an amazing day and adventure and I wouldn't trade that for anything. Although next time?  I may take the helicopter tour:)  Or not.  I know I had the best view of the day!
Oh, I forgot, the best part of the day?  At the finish when I saw my family again and knowing they had a great adventure day on their own.  The girls are now officially "Junior Park Rangers" and can tell you all about different kinds of scat!  And Michael?  Total rock star taking care of everything while I was out exploring, thank you love!
Posted by Michelle at 1:10 PM

I'm so glad we got to do this together (for some of it :)). I'm proud of you too, you broke the huge more than marathon distance, and I think you will find it easier and more fun in the future. I'm glad you enjoyed the experience, and I'm excited to have more adventures with you in the future!

Hey. It was a real pleasure to run and hike with you on this incredible trip. Honestly, it's just sinking in now what we accomplished. Thank you for the company and the laughs.

You have a great family. It was nice to meet them. We're all pretty lucky to have such support.