Yep, that's right. I have a couple of reasons for the title of this post....but really, it came to me this morning as I showed up to Masters swim for the first time in uh, six weeks? I do push myself when I swim by myself. Really. I do. Kind of. But not the way Coach Paul pushes me in a Masters swim session. Even yesterday as I swam by myself, I lulled myself into a kind of....I don't even know the right words.....consistent pace during my 30 100's. I know what pace I can hold give or take a couple of seconds without much variation or, errrr effort? But that's not really the case. Of course it's effort but I guess it just doesn't seem that way when it's such a no-brainer for me. Some of my peeps can do this running and/or riding. They know exactly how fast we're going and it is a mystery to me how they know. But put me in a pool and it is the same type of knowledge. Consistant pace. 15 second rest. I just knocked the 100s down one by one. Heart rate - high? Um, no. The only thing I needed to work on was loosening up my shoulders and make sure my right arm was where it needed to be. Sure, I pushed a couple of them. But not like I pushed this morning. Literally a 15 second difference in a 100. 15??!!

It was a sprint day at Masters and one of the sets was 4 x 100 FAST. En Fuego as Coach put it. Zowie, I'm thinking to myself. This is going to hurt. Because, I really have no speed right now. I don't have that fast gear going yet. I tried on Tuesday night at track. Really, I did. But when it came down to it? There was no fizzle in my sha-nizzle. My get up and go, got up and went....nowhere. I'm pretty sure the virus I had last weekend combined with the Grand Canyon sucked the life out of my speed so hopefully it will make an appearance again soon. And the track workout was almost like the 30 x 100's, just knocked down an even pace, only varying by a couple of seconds. Effortless? Hardly but I just knocked 'em out. But these 100s? They were on 2:30, so plenty of rest. First one, 1:08. Cool, but that hurt. 3 more? Second one, 1:08. That one hurt even more and not much giddy-up on the final length. Third one, oops 1:09. Wait, can I have more rest? Darn. Fourth 1:08. And it hurt. My arms, legs, abs, back. I could feel the lactic acid burning. But, I'm happy with the times and honestly I'm pleased with the burn. It's time to get it back! Of course, Stevie-P has other plans for me this month. One of which is to keep me out of the pool in favor of more time on the bike.

Another reason for the speed kills title? I have been riding in our hills here in Colorado for several years now and it still amazes me at the complete lack of respect that cyclists receive from drivers that are in big cars and trucks. Some days are good and I complete a ride and think, no altercations or bad experiences with drivers - yeah! Some days, like Wednesday, I get off my bike and thank God that nothing bad happened and I'm able to drive myself home. C'mon drivers, share the road! There is no reason to bark and yell at cyclists. There is no reason to flip us off. And certainly no reason to cut us off, spray dust on us, honk at us, and give us mere inches from your mirrors. Slow down and CALM down. It's not the cyclists fault that you are late for work. (My PIC rode Wednesday too and she had some choice comments as well about the a**hole drivers, read it here)

And since I'll be on my bike no less than 17 times during the month of May, this subject of aggressive drivers is something I'd like to NOT write about again. 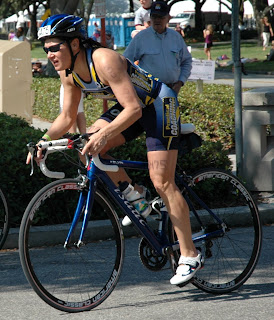 Princess and me last year on better terms (even if I had just wrecked her the week before!)
Why so much time on Princess?  Well, a certain lackluster bike performance at Rage of the Sage earned me some quality time on the bike.  Apparently I will learn to LOVE the burn of the bike!!  Bring.  It.  On.  After the miles and miles and miles and miles I have put on the bike since January, I'd like to see some improvement coming up.  And if it's not until Worlds?  I suppose I can wait.  But maybe not.....clearly not as patient as I used to be!!