Normally, I can sit down and write/type a race report without much thought and effort, it seems to be more of a verbal regurgitation.  But with this race, not so much.  I am having a tough time getting it out there.  The race was Saturday and I have sat down several times and not been able to gather my thoughts.  In my mind it was a momentus (not even sure that's a word) event, so exciting, so intense....where do I even begin?  So here are some snippets of the day....
To put it in a nutshell, I loved this race.  I was nervous to be sure, but ignorance especially in this situation was bliss.  In fact, Steve was visibly more nervous than Sonja, Beth and me.  When I asked him about that after the race he said, "I knew what you girls were getting yourselves into, you didn't"!!  So what had we committed to?  A cycling road race in Hugo, Colorado (somewhere near the Kansas border I believe).  78 miles long.  And we registered as Cat4 (novice) racers.  Steve gave us all a quick low-down on race strategy and tactics but really, you don't know how a race will unfold until you are in the thick of it. 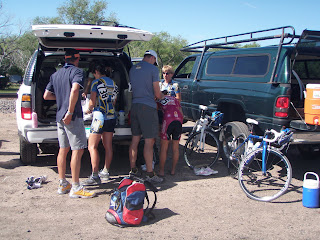 Getting ready before the race.  Steve and Troy played a HUGE role in helping us out.  They got our bikes ready, pinned on our numbers, filled bottles, and basically got us ready to go!!! Then, they sagged for us.  We couldn't have had a better support crew. Thank you guys! 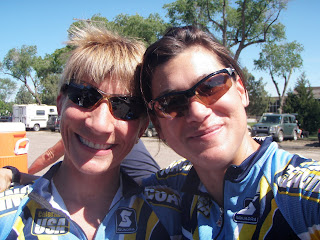 Beth and me before the race.  Yes Steve, I am eating. 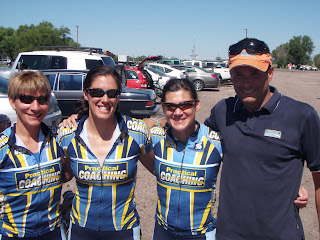 Beth, Sonja, me, Steve right before the race began.  FYI Steve - not eating here.
As we lined up for the start, I looked around and saw all sorts of girls in various shapes and sizes and differing levels of intensity.  As I sometimes do, I questioned myself....do I belong here?  Will I fit in?  Will the girls like me?  Is my bike nice enough?  And then I corrected myself.  Who gives a shit self, this is a fucking race, get over it.  The whistle blew and we started off.
The hardest part of the day for me was first half hour when I was just trying to get my shit together and get my legs warmed up.  The lead girls would accelerate just slightly up the hills and my quads would let me know they weren't excited about that.  But we'd crest the hill and my quads would shut up and I would feel pretty good.  After my talk with Steve, I was paying close attention to everything going on:  the subtle (or not) pick-ups and the pain in the ass slow-downs.  I haven't ridden in a pack that big before and really my main goals were to not get dropped and to not fall and take anyone with me!  I also had specific instructions to not talk so I just listened.
And boy, there was lots to listen to.  Those girls were CHATTY.  Everyone seemed to be talking about all sorts of interesting (NOT) topics.  And, these girls loved to announce anything that was going on:  slowing!, on your left/right!, bottle!, that's my wheel!, squirrel! etc.  About 20 miles in (approximately, I was also instructed to not wear a garmin or heart rate monitor), I hear an "Oh Shit," right behind me and then a shoulder in my right hip/thigh.  WTF?  There was also no "sorry" or any sort of acknowledgement that there had been an unintentional bump.  Someone tried to take me down, are we kidding here???  But since i had taken Steve's crash course on bike handling the day before, I kept pedaling and accelerated a bit and then just decided to get to the front of the pack.  BEOTCH!!! 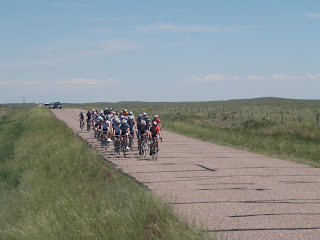 Here we come!  BTW Steve, I don't believe I am eating here since I only took in 3 gels in 3 hours 35 minutes. 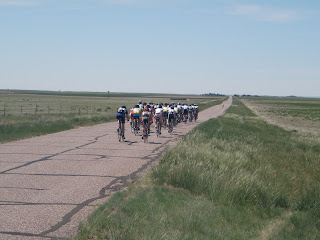 There we go!
Another interesting part of riding with these girls was that no one would take the lead.  There were just a handful of us that would actually take turns pulling.  I couldn't believe how many girls were just hanging out at the back of the pack and never ventured to the front for a little pull.  There was one point in the ride I was pulling up a hill and made the sharp left indication that I was done pulling, and NO ONE came through!!!???  I was still in front.  So, I slowed down.  And then I just stopped pedaling before someone else stepped up.  Fascinating!
At mile 40, we encountered our first feed zone.  Since I had hardly taken any nutrition anyway I certainly wasn't going to risk my life and those around me by attempting to take a water bottle and just rode the yellow line.  At the same time, the pro men came whizzing by and it was chaotic.  Then I heard Steve yell.....go with the men!  So I did what I was told by my coach until a gal in red came up to let me know that "we don't attack in the feed zone."  I wanted to tell her I was just listening to my coach and not attacking but I wasn't supposed to talk.  Clearly Steve knew I would say something idiotic like, it's my first race I don't know what I'm doing.  I'm just a triathlete.  Help!  The cool thing was, a minute later she looked at me and said, OK, now we can attack.  So we did!  Another girl came up later and asked my name and my category and how I was feeling so I finally broke my silence reluctantly.
As the miles went by, I grew more comfortable and more aggressive.  I was feeling good!  It was great knowing that I could ride in the front for a bit and then pull off and take a break and then get right back in the thick of it.  It was also unbelievably cool to see Sonja and Beth with me in the front pack (I really have no idea how many girls were with us at that point and no CLUE as to how many had dropped off).....we were all riding very well and even though we weren't talking I still think we had an inherent understanding of where each of us was at!  After the second feed zone, the three of us were still in the running and Beth and I went to the front.  Should we stay?  Should we go?  I thought it was too early - we still had 18 miles but we definately knew we could do it and possibly even be successful.  What a great feeling!
At mile 70 I heard Beth behind me say GO!  I figured we were making our move and I went.  I pedaled a bit harder and looked back and realized I was by myself.  Wha?  What should I do?  Only 8 miles left so I continued to go off the front.  I caught a Cat2 girl and various men in the groups in front of us and I passed them like they were standing still.  Who are you?  That's what was running through my head.  I mean really, leading off the front in a road race?  I just smiled to myself.  This was fun.  I kept looking back at the pack and they were still visible.  A quick check of my legs and I knew I wouldn't be able to hold them off so I let up a bit and let them consume me.  But, I got right back into it and tried to make my way to the front because we were clearly heading for a sprint finish!  The posturing began and I couldn't quite get myself where I wanted to be for the sprint but I was in it and surged to the end.  Beth was up in front, Sonja right behind her with me on her tail.  It.  Was.  Awesome. 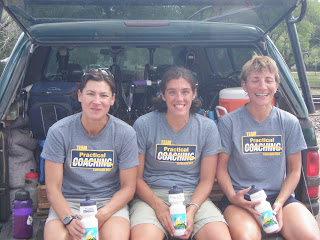 After the race.  Yes, Steve I am eating again.
The interesting thing about this entire experience are the lessons learned as well as the woulda, coulda, shoulda's that I keep thinking about.  It's Tuesday and I'm still thinking about it!!  But I suppose that's why bike racing is so addictive.  And yes, I will do one again.  And maybe in the near future!
Again, thanks to Steve and Troy for the support.  A big shout out to Sarah and Nicole who also rode extraordinarily well. To Holle for stepping it up and having that big nasty growl/grin on her face at the finish line!!  And, of course, to my PICs Sonja and Beth for sharing such a fantastic experience.  You girls rock.
Posted by Michelle at 8:28 AM