It's been awhile since I've had a call. You know the one. It's not really a question, more like a statement. Coach Steve: There's a crit on Sunday I'd like you to consider. And then the topper. And Sonja and Beth are doing it too. Because we all know, if Son and Bethie are in, so am I. Really, no questions asked. If they were going to jump off a bridge, I would just say OK. Because it would probably be a kick-ass good time. And who am I to question races or bridges?
So that's how it started. I got the call Friday, the crit was Sunday morning. Which left me not much time to stew over this one. And, of course, this after a conversation with Holle about how doing a crit this close to my key races was kinda out of the question. Oh how things can change. A crit you ask? Criterium. It's a type of bike race but not at all like the Hugo race we did back in May. That was an 80 mile road race. This was a figure-8 type course several city blocks long with 8 turns on each loop. All out racing for 40 minutes. Very aggressive, very in-your-face. Crashes are apparently relatively common for the "novice" women. Yeah.
PIC Son and I rode down to the race from GV, a nice 14 mile easy spin. I've been missing my PIC, she's spent the last month in California with her family so we finally got a chance to just chat. She was pretty nervous because she's seen a crit before and knew what kind of mess we were getting into. I wasn't nervous. Yet. I was blissfully unaware at that moment. That changed as soon as we rode up and I saw the course. We were there early enough to get the low-down from Steve on how to ride the course and most importantly, how to negotiate the turns. He was also throwing down all sorts of f-bombs about the competition and how there are no nice bike racers and things like that. If any of us crashes don't think about it just keep moving. Hmmphf. Clearly, I needed to put my skirt away and grow a set quickly before the start. Only problem was, I only wanted to take a nap. Sometimes this happens before a race - getting a serious case of the yawns. But this was pure tired-ness. I knew it Friday night and after Saturday's workout I was just plain tired. I rolled my legs Saturday, put my feet up, took a nap. Did what I could to start feeling fresher but I woke up Sunday and just wanted to go back to bed.
We lined for the start and I'm really not sure how many of us. Seemed like lots but if you look at the picture there weren't that many. As Cat 4 racers we had the first start time of the day: 7:00am. The gun went off (was it a gun? not sure) and it was game on from the get go. I had to get my foot in my pedal as soon as possible and immediately hit it. There was no gentle roll-up. No gradual acceleration. It was balls out from the start. 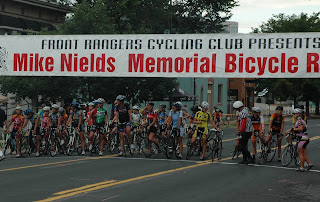 Lined up at the start, the PC girls are at the left of the picture
C'mon legs, let's go!!! That was me talking to my legs. But not out loud because once again, we were not allowed to speak to the competition. Ohhhhh, the legs were not happy. Downright pissed if you ask me. But I pushed them. After the second turn I somehow was behind and towards the back of the pack. WTF? Already? So for the next 2-3 laps I worked hard to catch up with my girls. I finally got back on with them and round and round we went. It was really interesting watching the lines of the turns the other girls were making. They were completely different from what Son, Beth and I were taking. For a left hand turn, we would be at the far right of the street and everyone else was in the middle, using the turn lane. I would have to hit my brakes every other turn or so as someone would unexpectedly (or not) veer into my line and I needed to avoid them. I didn't look behind me because whatever was happening there was of no concern to me.
About halfway through the race the unthinkable happened. A PC girl went down in front of me on a left hand turn. White bike, black pony tail, it was Son. Even though we were supposed to ride on and pretty much ignore what happened that was impossible. To see your teammate and PIC skidding on the ground in front of you.....it took a very conscious effort to not stop and check on her. I had to hit my brakes though so I didn't run over her and then Beth and I were flagging Steve that she was down. After I did this I looked up and crap.....there was a huge gap now between the lead group of girls and me. FUCK. I knew I didn't have the legs to get myself back in and I was worried about Son. But I put my head down and kept pedaling. I saw some girls ahead of me and vowed to close that gap but the front group was gone. On the next pass where Son went down, she wasn't there. And Troy was in the exact place as the last time I saw him. That was good, she clearly wasn't hurt badly. And I kept pedaling. My legs still were begging for a break but there was still time left.
After a couple more laps I heard Steve and Holle yell about letting the girl behind me take a pull. Excuse me? There's someone behind me? Are we kidding? I took a quick peak and sure enough, a girl has been riding my wheel for I don't know how long. And I got pissed. I stopped pedaling and she went around me and I took a breather on her wheel for a moment. But she wasn't really in to the whole sharing equal pulls. In fact, she would pull for 2 turns and I would take the remaining 6. Really did not care for this chick at all. We caught some of the girls I had my eye on and then looked up and saw we only had a couple of laps left. I knew exactly what was going to happen - she was going to ride my wheel through the last turn and shoot ahead of me down the straight-away and beat me to the line. She even said something like nice pulls at the start of the last lap. But not today. I was not going to let her do that after pulling her ass around the majority of the race. The last turn she shot ahead and I did everything that I possibly could to stay on her wheel. I caught her and passed and as you can see: 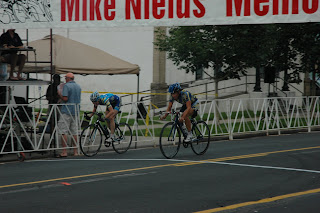 HA! I got her at the line!
And then it was over. 40+ minutes later, 16+ miles, and averaging something like 21+ mph. It was really intense. And I was pissed. Finally, my aggression got the best of me and I wanted more. It's too bad it didn't show up earlier in the race!! I ended up 13th, Beth was 10th, and Sonja 7th. She's fine except for a lovely case of road rash on her hip. Lessons learned? Of course. But I'll keep those to myself for the time being. Will I do it again? What do you think? OF COURSE!!! But probably not until after the big races:)
Later, Michael and I took the girls back to the course to watch some other races. I want to learn more so that the next time I can put myself in a better position in the race. I watched the more experienced racers take the turns, I watched the tactics. It was fascinating. 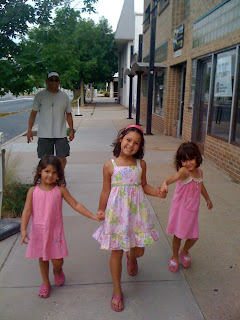 Charlotte, Isabelle and Annie. Yep, they look like angels. We know better.
Posted by Michelle at 8:17 PM

Oh, she was so gunning to take you down. Look at her, she is straight up Cavendish styling you to the line. She's outa the saddle head downing it. Grrr.

She needs to learn a little from Contador...no don't talk trash about Lance...not that part...but the if you pull 20% of the way its class to not cream someone the last 10 feet.

I guess all is fair in love and bike racing!

Nice finish!! Awesome that you got her at the line.