On Saturday I drove myself down to Colorado Springs to participate in a little sprint triathlon at the State Games of America. The entire event is pretty cool, something like forty different sports for kids of all ages to compete in. The triathlon fit perfectly into my schedule and after the near "disaster" at Boulder Peak (I know, I know, it wasn't really a disaster, more like a disappointment) I was just wanting to have a positive experience before heading into my "A" races later this month and September.
I woke up in a good mood and had just a bit of tummy butterflies. I could still eat though (Mix1 is the BEST!!!) and had a small cup of coffee on the drive. I was having a good time listening to cool music and watching the sun come up. Even though transition opened at 5:30 I purposely decided to be anti-Type A and I showed up around 6am. I still got a fantastic transition spot! This race was so low key that there were only 6-8 bikes per rack. It made for a long transition area but I was comfy and could have even had a tent popped up in the space I had. 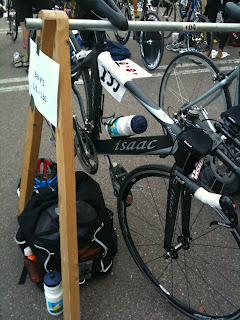 nice job girl! Glad you cemented the zen like state you want at nationals!