Yesterday, Sonja, Amy and I headed up to Keystone to participate in the 2nd annual Pink Chase sponsored by K2. The goal of  the Pink Chase was for teams of 3 women (our team?  Bunnies For Boobies) to raise money (and awareness) for breast cancer research.  Then we had the opportunity to compete for most vertical skied, best costumes, and of course, most money raised.

I have to tell you, we kicked it into high gear this week before the race.  Our initial donations had been stagnant for about a month, so we blogged, tweeted, and begged for more money.  And it worked!  We even had donations coming in on Friday night from our Twitter friends....it was great to experience the power of social media networking in action.  Bunnies for Boobies ended up raising almost $1500 in the fight against breast cancer, a proud moment for the team.  And, the 18 teams that participated in the Pink Chase raised a total of $30,000.  $30k??!!!  WOW!  The names of the teams were awesome:  Team Underwire, The A Team (a-cup), Breast Friends etc. 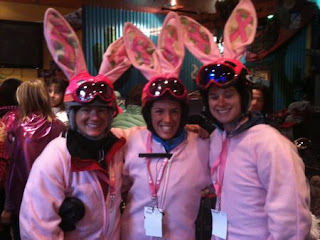 And then on Wednesday, Sonja decided to make costumes.  She had a few spare hours and got motivated. And look what she did!  These costumes were amazing!  As someone who looks at a sewing machine and shivers in horror and fear, to watch her in action was unbelievable.  I provided moral support and Starbucks.  She did the rest.  What else can I say?  She rocked the costumes!

So, day of the Chase we arrived early at Keystone.  Checked in and received the most adorable pink hats from K2 EVAH!  Of course, we wanted to win the overall contest (vertical, money raised, and costumes) but I knew with a team that had raised $5k it was going to be tough.  Especially when I saw them ski.  These ladies were from Vail, so yes, they could ski.  And they had really cute matching pink ski jackets.  They really did have a lock on the overall.  But us Bunnies weren't giving up.  Amy had packed food and we were carrying water (although dehydration was the best bet so we didn't have to make any unnecessary stops).  We were trying for vertical!  We had a minor technical glitch at the start of the day and then 2 bunnies had a directional glitch (ahem, lost) that cost a bit of time.  And this bunny had to pee.  But only once.  We skied our tails off! 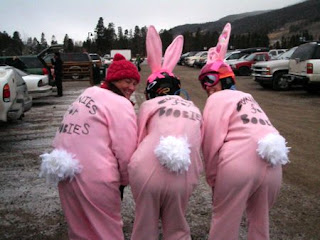 Honestly, the best part of the day (for me) was the attention we brought to the cause.  Trust me, we got lots of attention.  How often do you see three women sporting full-on bunny costumes and shredding down the mountain.  Every lift, every run we had people cheering for us.  The teenage boys had so much fun saying "Boobies"!  And everyone who asked, we told them what we were doing.  Raising money for breast cancer.  Because, at the end of the day, that was what this was all about!  My cheeks hurt from all the smiling I did.

A big shout-out to Amy and Powder7 skis.  They supplied us with some pretty bad-ass skis - the K2 Burnin' Luvs, they were quite simply the fastest ski to get down the mountain.  And, to Smith Optics, another great sponsor of the Pink Chase.  They hooked us up with a great deal on helmets and goggles (pink naturally).  Of course, without all of our donations we couldn't even have competed for the overall prize, so THANKS to all of you who donated! 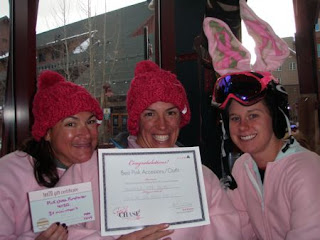 So, how'd we do?  We won best costume!!!  And missed most vertical by just 200 vert. feet (darn hot chocolate bonus stop).  I have no idea how many runs we skied because I simply cannot count that high. And, as we suspected, the top fundraising team sporting the matching ski outfits brought home the Overachievers award.

If you want to check out a great video of the day, check it out here.  PIC put it together last night and it's a fabulous summary of the day.  Boo yah Tyler was the video man on the last run of the day!!

We did have quite a blast out there. I will remember that day for a long time!