Today is the day I have dreaded.  That I was hoping would not come.  That we wouldn't have to make this decision. 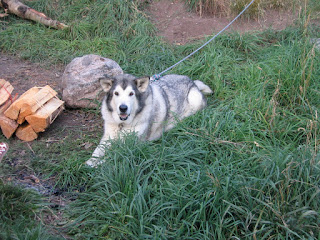 Let me tell you a bit about my first baby.  Almost 12 years ago, newly engaged, and proud new homeowners, Michael and I brought home our malamute puppy.  The drive home from the mountains was hilarious....he sat in my lap and farted the entire drive.  We called him Primo.  We actually wanted 2 dogs, and name them Prima and Pronto, you know, after the ski runs at Vail.  So Prima should have been a girl but since we had a new boy puppy and Pronto does not come before Prima on the ski mountain, we came up with Primo.  It is also the name of a Hawaiian beer and means cousin in spanish.  Oh, how we adored this puppy!

From the get-go it was clear how big he was going to be....you should have seen the size of his paws!  He was good natured and pretty mellow - clearly all his extra energy was being filtered into growing into a large boy.  The only time he wasn't mellow was when he was around other dogs.  Alpha male to the extreme.  I mentioned that we wanted two dogs?  Primo made it clear early on that he was a "one dog" family type.  Even with all that alpha stuff going on, he made a few great puppy friends!  Primo eventually topped out at 125 lbs.  A gentle giant.

Primo was a talker.  If you know a malamute, you know how they talk.  They don't bark really, but communicate through a kind-of howl.  I would sit and have conversations with Primo,  back and forth.  He would howl at all sirens, and everyone in the neighborhood could hear him.  Primo had a personality too, he was kind of funny.  And the expressions on his face!!

He loved chasing squirrels, and well, really anything smaller than him.  Cats, mice, small dogs, birds.  He was pretty quick too so those small things had to be careful!  We took that dog up many a mountain and hiking was his favorite thing to do.  He could pull me up any trail at break-neck speed.  When he got hot, Primo would just sit on a sprinkler or in a river or wherever else there was water to cool down.  But he hated swimming!!  He was also not a "running" dog.  Sure, he was great for the first half mile but then he would just stop and I would end up pulling him home.  Guard dog?  Not really.  But he was big enough to scare folks especially when he barked.  Give Primo a steak and he would give you the keys to the kingdom.  It didn't even have to be a steak!

Primo used to sleep on the bed with me when Michael was out of town!  He took up nearly the entire bed, he'd just jump up and settle in.  He was such a good boy.  And then the kiddos came along, and he settled into the life with kids role pretty well.  Isabelle and Charlotte loved him so much but for some reason, Primo really had a special place in his heart for Charlotte.  As he got older, he just loved going into her room and settling down at the foot of her bed.  And Char always had a hug for Primo and fed him treats.  Both girls loved helping take care of him although the "excitement" of picking up Primo poops with their dad wore off after a few months.  I'm pretty sure Charlotte always fed Primo under the kitchen table too! 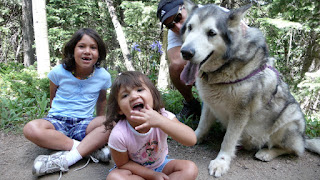 The last few years, Michael and I watched our Primo grow gracefully into old age.  Although at times, he was absolutely a cranky old man.  His walks got shorter and shorter.  His activity level fell off but he still got up to say hi to the neighborhood fox (yep, a girl fox who always flirted with him).  He had some quirks, I'll never forget his aversion to wood floors.  And his eyesight was going too.  But he'd still come in at night and hang out with the family.

Some dear friends of ours had malamutes, Primo's cousins, that were a couple of years older than our boy.  And we watched their puppies grow up and into old age.  And we watched them have to make a tough decision too.  We kind of knew that one day, we might have to do that as well.

Unfortunately, today was that day.  Primo woke up Saturday morning confused.  His hips didn't look so good, and it was clear that moving around wasn't any sort of picnic for him.  He drank a ton of water, didn't eat, and laid under a tree the majority of the day.  He got up the stairs OK on Saturday night but by Sunday morning, going down the stairs hurt him.  Primo drank water and finally ate some yummy wet food but only with assistance on Sunday night.  He slept inside in the basement but woke us up around 2:30 because he was no longer able to move on his own.  He was in a great deal of pain.  Michael and I made the decision that we didn't want our dear Primo to hurt anymore.

Primo, you have been a most loved doggie.  Thank you for being with us and being part of our family.  You will be missed and will always be in our hearts.  Thank you for all these years! 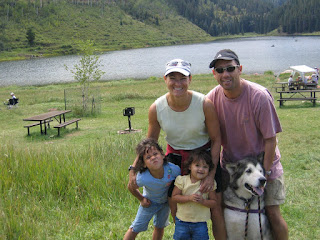 Rest In Peace Primo.
Posted by Michelle at 4:04 PM

I'm so sorry for your loss, Michelle. What a beautiful tribute to your furry friend.

crying...again. He was so loved. I'm so sorry Michelle.

"You think dogs will not be in heaven? I tell you, they will be there long before any of us."
-(Robert Louis Stevenson)

So sorry to hear - sounds like he had a great life with you guys though!

So sorry to read about Primo. Dogs are the best of us.