The Rev3 tri in Knoxville served as the tri season opener for me this weekend.  Once again, I went to the south and absolutely loved the city and the people.  What's not to love about that accent y'all?  My second family was in Knoxville racing and spectating:  Sonja and her family, Tyler, Beth, Anthony and Michele, and all of my new Trakkers teammates.  My athlete Jay, his wife Sarah, and  their baby Cale were welcome additions to our pack! 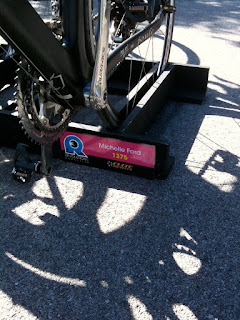 Rev3 treats the athletes so well - check out our numbers and our named transition spots! 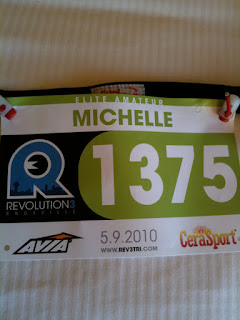 The race had an elite amateur division and after much discussion with Sonja and CV, I went ahead and put myself into that wave also meaning that for the first time Sonja and I would be in the same wave!!  I was definitely nervous about it when I made the call about a month ago but hadn't really put much thought into it since then.
Waking up on race morning, I was not nervous.  At all.  It was a bit strange.....I still couldn't eat but got my nutrition in the form of my favorite pre-race meal mix1 and half a pack of Justin's Maple Almond Butter.  I had excitement butterflies, not nervous butterflies.  We all headed down to transition and I was just excited to see what the day had in store for me.  I was confident in my training going into the race but a bit leery of the bike course and the hills.
The elite amateur wave had the advantage of starting right behind the pros and as I dove into the water I knew I felt good.  It was so great to have PIC right there at the start, we just kind of floated along waiting for the start.  Of course, this wave not only had really talented women.....but really talented men.  That's right, swimming with the boys.  Again.  This usually never works very well for me and this race was no different.  But I put myself right up front and in between 2 cute fast boys and about 30 seconds before the start I realized that this was not a great place to be.  Oh well, too late now! The horn went off and the madness commenced.  This may very well have been the toughest swim start EVAH for me.....yep, worlds was tough all the way through and nationals was just a beotch of a swim....but this start?  Whoa.  Within seconds I had been hit in the head a couple of times and my googles nearly taken off.  It was a washing machine of white water madness.  People, ahem MEN, were trying to actually swim over me.  I believe I got a well placed kick in there.  Anywho, after sprinting for a minute I realized quickly I was anaerobic and had better settle into my rythem.  I ended up trying to follow a guy but kept hitting his feet so I went around him.  I think he ended up in my draft.  And I was swimming stroke for stroke with another guy.  Our threesome swam together until the end.  The swim exit was a bit "exciting" as it was on a dock - no stairs, no ramp, you just had to hoist yourself out of the water!  I got out and took off my googles and......couldn't see a thing!!!!  My googles had filled half way with dirty scummy river water at the start and the water had created a milky film over my eyes!!!  I kept blinking trying to clear them as I was running up towards transition.  It wasn't until I was on the bike that I finally could see! 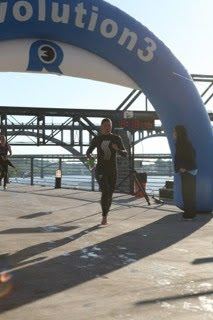 Blindly running off the dock.  The clock says 18:18 for the swim......I think it may have been a bit short!  Eric (PIC's dad) is an elite amateur photog and had a media pass so had access to all the great picture spots on the course.  Love these pictures.
The first tri of the year is always interesting - you know there are going to be some cobwebs to dust off but you just don't know which ones.  Well, for me it was on the bike coming out of and into transition.  As I left transition, my powertap CPU fell off and I had to retrieve it. Duh.  I put it back on and got on my way.  Feet in the shoes but darn it I didn't clip my troublesome left shoe in!!!  Crap!!  OK, settle and pedal.  Foot in and clipped in.  Phew.....now let's get on with this course!
Rev3 did not go wimpy and flat with the bike course.  Nope.  This is the toughest bike course I have had the pleasure of riding!  It was awesome!  Hills, hills, hills, steep descents, sharp technical turns.  You had to be on your game.  But my legs were bitching and moaning a bit.  Blah blah blah I said back, let's just ride.  Another advantage to the elite wave?  There was not a soul around me.  I was passed in the first 10 minutes by a couple of girls and a couple of boys but that was it.  I literally did not see another rider around me, I had the road to myself!  I could really work the turns and not worry about anyone behind me, or in front of me for that matter.  Everytime I passed volunteers on the course they cheered their hearts out and made me feel a bit like a rock star.  Nutrition on the bike consisted of my fav, First Endurance EFS Fruit Punch.  Yummy, I got down about 100 calories on a cool day.
The other set of cobwebs?  Yeah, that would be taking numb feet out the bike shoes and attempting to pedal on top of my shoes with NO feeling in my feet (it was a cool morning).  It wasn't pretty.  I couldn't get my feet and the shoes to behave, what a nightmare.  Fortunately, I didn't leave a shoe and it didn't slow me down too much.  Apparently I also lost the darn CPU again on the way back to transition. (thanks SK for picking that up)  First and last time racing with that thing.  Numb feet also make for a tough time putting on the racing shoes....... 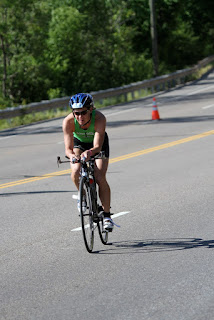 Heading back into transition.  I was passing (on my bike) all the pro men bustin' a move running to the finish, it was cool to witness on the bike 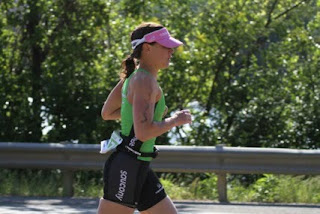 I headed out from T2 and felt good from the get-go.  I just thought about my turnover and getting my feet off the ground.  I looked up and saw PIC heading into T2 on her bike.  Uh oh.  I felt the target on my back and wasn't sure I had enough of a lead on her for the run!  She's such a spectacular runner and with us in the same wave I knew I was the carrot she needed to really push it!  Focus!!  Run. Breathe.  Run. Breathe.  Keep up the pace.  That was my mantra.  I hit the turnaround and for the first time of the day, my tummy turned.  I ignored it.  I just had 3 more miles.  That's it!  And there was PIC again - we gave each other our customary slight lift of the hand - I absolutely love seeing her on the course!  I saw Tyler too and Bethie just screaming her head off at me as she was coming in on the bike.  Man, these peeps are awesome.  Of course, Trakkers mama bear Carole was out there too going crazy and I had just 1/2 mile left up the hill.
And that was it, the 2010 season had gotten off to a great start!  I had no idea what my time was nor did I know any splits.  And I still don't know except for my swim time.  And I think I had a stellar bike.  I feel good about my run too even though I may be disappointed in my time. But I don't know it yet.  I ended up 6th in the elite amateur category, Son was 7th.  I believe we were 19th and 20th overall females too including all the pros.  I call that a solid start.
Congratulations to Jay M. for his 1st place age group finish, he is well on his way for a great come-back year after a major illness last year!  Bethie placed 1st too and Anthony was 2nd in his age group.  Tyler was psyched with his solid race.  All in all it was a great day. 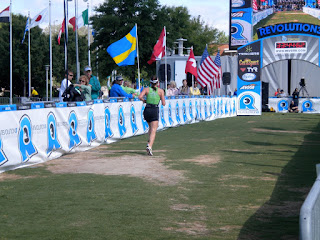 Running to the finish 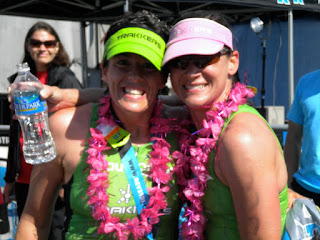 PIC and I at the finish 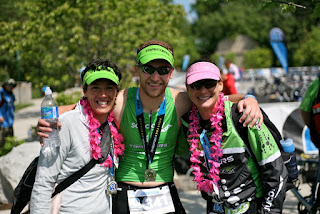 Post-race with Son and Jamie 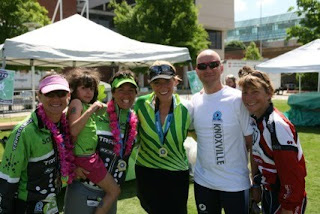 With Biggest Loser star Tara Costa after the race

Awwww, we had so much fun, didn't we. Racing in the same wave was a highlight for me. You are in fine form my dear, poised for a great year!

Congrats on an awesome race Michelle!

It was great finally meeting you. I'm totally looking forward to racing with you again in CT!