The week leading up to the race was rather unlucky for me.  I was sick for a couple of days, got kicked out of an indoor pool due to lightening outside (???), and blew a brand new race tire after only 11 miles on it.  So by Thursday afternoon I was freaking out just a bit and figured this year may be lining up as another "hate it" year.  But I took care of things the best I could.  The bike shop put a new tire on at cost for me (thanks Adventure Cycling).  And I drove to Boulder for a fabulous pre-race recon ride with coach CV and Angela on Friday.  Phew, it was just what I needed!  I knew that I might not have my best race ever but it was all OK.  I picked up my packet, figured out which Saucony's I would run on during the race (Fastwitch!!!), had lunch with my sister, went to a great family event at a water park sponsored by Kompetitive Edge and TYR, and then started chillaxin'.  I slept great Friday and Saturday, napped and watched movies Saturday afternoon with my kids, and had an incredibly relaxed day.

The race you ask?  Since last year was a "hate it" year, my main goals were to finish strong and happy even with the crappy week.  No med tent for me this year.  My wave was one of the last to go off at 7:15 and I immediately took off.  I wanted to see if I had any "players" in the swim.  For the first time this season, I was alone out front.  The sun was straight in my eyes so I had a tough time sighting before the turns but all went fairly well.  I don't even think I swam over anyone - YEAH!!  I was tired though and losing motivation since I didn't have anyone swimming with me.  I started breathing every breath and contemplated taking it easy into the beach.....nah, can't do that.  I got to the beach and immediately saw my kids and Michael cheering me on.  Michael told me I was first out for my wave and the girls were ringing those cowbells.  That was awesome! 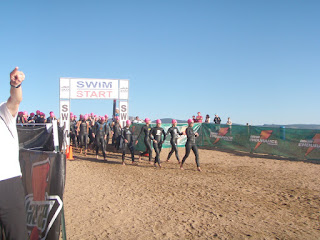 T1:  I was halfway out of my wetsuit when I entered transition, found my bike, put on my helmet on and got out of there.

Bike:
What can I say about this bike?  It is a great ride, a steady uphill for 6 miles and then the punishing 15% grade for 2/3 of a mile up Olde Stage Road.  Spectators line this part of the climb and cheer everyone on.  Someone even had a vuvuzela this year - nice touch!  The devil guy was out again, chalked messages were on the pavement....it is all really pretty cool.  You kinda feel like you're in Le Tour (I imagine).  I ran out of gears pretty early but I wasn't worried.  I got up that hill as fast as I could (which wasn't fast at all), crested the hill and prepared for the last little bit.  At this point I heard a friendly voice from a gal I passed - is that Michelle?  Is that Michelle Ford??  All I could do was nod my head and this wonderful voice yelled at me - go get 'em girl!!!  Awesome.  I found out later it was Amy, a friend who has been battling breast cancer last year.  And here she was conquering Olde Stage....No, you go girl Amy!  She is the real winner in all of this without a doubt.

But it was fly time, I minded the 35mph speed limit (first reaching 40mph before hitting the brakes) and just felt like I was flying.  I felt strong and fast and kept passing people.  One young gun tried passing me on Lefthand Canyon but I would have none of that.  I passed him back twice and dropped him at the turn on 36.  Nelson Road was a blast and I kept pushing.  I rode 63rd hard and was passed by some fast men in the 40-44 age group that had started after me.  The Diagonal was just one big line of riders so I took the far left of the shoulder and passed.  I heard the motorcycle behind me slow down and follow me and in that time I passed another 6 people.  I wanted to turn around and say,  I'm NOT drafting, I am just riding REALLY fast and PASSING on the left!!  Finally, they took off and it didn't look like they were writing down my number. 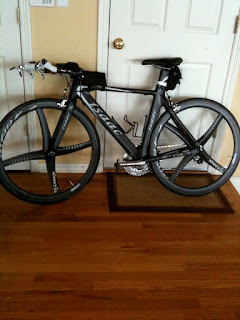 I think my bike looks smokin' hot with the race wheels (Matt, thanks for letting me use them!!)

And then I realized that I was still in the lead for the age group, I hadn't been passed yet.  Huh?  Where was Steph (unbelievably fast ruler of my age group), she always passes me early on?  Where were the other gals in my age group?  Typically, I lead the swim and then get passed on the bike and hold on for dear life on the run.

T2:  I pulled into T2, threw my awesome bike on the rack, pulled on my shoes and got outta there 45 seconds later.  Ohhh, there's Steph, she passed me on the way out of transition.

Run:
OK, I'm in second now.  Second?  Really?  But remember, don't chase her, don't end up in the med tent, don't bonk!!  Got it.  I settled into a nice pace and watched my breathing.  I felt good!  I'm sure part of it was the EFS I drank on the bike and the gel I consumed before getting off the bike.  But my body felt good.  My niggling piriformis was behaving and my legs were fine.  I just focused on putting one foot in front of the other as fast as I could.  It was warm, but not as hot as previous races.  Before I knew it, I was at the turnaround.....only 3.1 miles to go and I was still feeling good.  Time to try to pick it up a bit.  I saw a gal from my age group about a minute after the turnaround and I wasn't about to let her catch me.  Not today.  I knew now that there would be no bonking, no med tent.  I just needed to get to the finish.  As I hit the asphalt, I really started to pick it up and at the tree at the top of the hill it was time to give everything I had left.  There were friends out there cheering me in and my family was cheering too - I even smiled!!!  I smiled as I crossed the finish line too.  This year I love Boulder Peak! 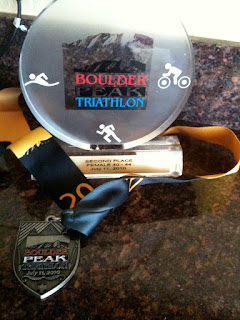 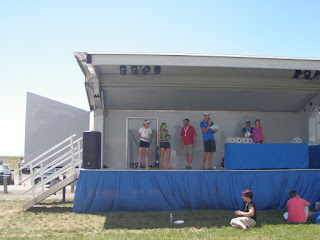 I know, you can barely see me but I'm the one up there in TeamTrakkers Green
Posted by Michelle at 9:19 AM

Glad to hear you loved it! Nice job!