A race report for Isabelle and Charlotte!!  Today the girls ran their first official 5k in support of Cherry Creek Schools.  Their elementary school has been hosting "runners club" two mornings a week before school for the last month in preparation for the race.  Mr. Reynolds (gym teacher) and the school did a great job promoting the club and it was great to see all of the kids and parents running around the field. The girls have been participating and having a great time doing it!! 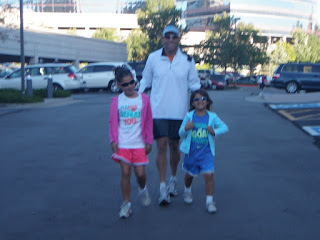 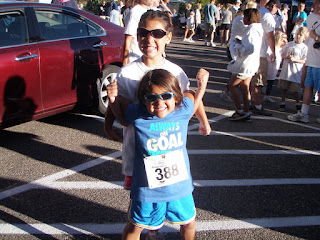 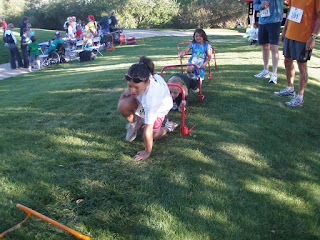 This was their pre-race warm-up: a boot-camp style obstacle course

This morning they were psyched for the race - up and dressed and ready to go.  The plan was for Michael and Iz to run together and for me and Char to group up.  We thought that maybe Charlotte and I would be the slower team since she's only 5.  However, Charlotte thought I was too slow to run with her.....hmmmmm.  There was a huge turnout for the race - we caught up with some of the other Fox Hollow kids and parents before the race and then we were off!  Michael and Iz were ahead of us but we stayed with them for a bit.  They pulled ahead and Charlotte didn't particularly care for that.  She was determined to catch up and pass them.  So that is what we did.  And then she decided that she didn't want to get passed back so Char continued to run along.  We held hands (awesome) for the first mile and stopped to get water at the aid station.  Michael and Iz were nowhere to be seen.  Char was happy about that. 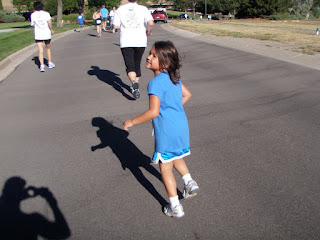 Mile 2 she got very serious....she let go of my hand!  Her cheeks were red and she was breathing pretty hard.  She only walked a very little bit and has already figured out that downhills are more fun than uphills!  Her shoe came untied so we stopped and fixed that.  I started to give her bogies ahead of her to keep her motivated and then we were in the final stretch.  I showed her the finish line and told her to give it everything she had.....and she did!!  Yes, this is one proud mama:) 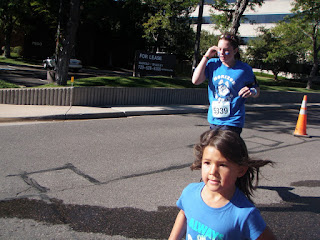 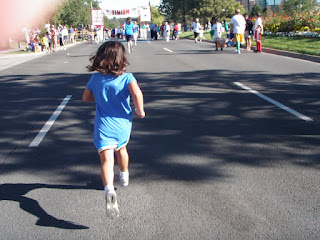 Yeah!  The finish!
I wish I could also give you Isabelle's report but I wasn't running with her.  Apparently she did a fair bit of walking but when she saw the finish line she broke into a sprint that Michael couldn't match - she was hauling!  So I'm thinking we have one kid who's fast twitch and one who is slow twitch. 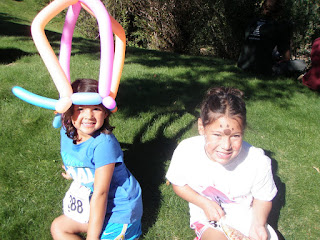 What festival would be complete without balloon hats and face painting
Results?  Charlotte's first 5k (at 5 years old) was a 37:58.  Isabelle came in about 9 minutes later!
Posted by Michelle at 6:44 PM