After the strenuous 5k with the family on Saturday, I had the Harvest Moon Aquabike to look forward to on Sunday.  It was only a 1.2 mile swim and a 56 mile bike and Charlotte wouldn't be pushing me along so I figured it should be an "easy" day.  Just kidding but I was/am disappointed I couldn't do the entire race by adding on the run at the end.  I'm still struggling with the foot issues and I just don't have the mileage to run a 1/2 marathon and risk injuring the foot 2 weeks before nationals and delay my running return for Ironman!  I also didn't want to DNF by stopping after the bike (just think that's a bad trend to start) but Harvest Moon offers an Aquabike - the perfect solution.  A quick email to Coach CV for his a-ok and an email to the race and wah-lah I was now entered in the swimbike and no run.

The strange thing is, when you take the run out of the race, it becomes much less like a race for me.  Sure, I had to get my bike ready but no race wheels.  Break out the wetsuit.  But it really made it seem like just a paid training day.  Was I nervous?  Not even a little.  Was I taking it seriously?  Ummm, not as seriously as a full tri.  I didn't even watch my eating the day before as I normally do.  Sleep issues?  Nope.  I even got up in the morning and had my usual big ride breakfast - veggie egg scramble, mix1, and a touch of coffee.  I sipped an EFS bottle on my short 20 minute drive to the race site (soooo nice to not have a big drive).  I listened to music and then saw the big line to get into the rez....didn't even phase me.  I parked, passed out nuun samples, pumped my tires, passed out more nuun, and found my way to transition.

This race is so nice.  It is laid back and a cool atmosphere.  Not high stress, high competition.  But trust me, that's not saying there was no competition.  There were some FAST peeps that showed up, including pro Angela Naeth, who I have had the pleasure of training with the last couple of months.  OK, let's rephrase that.  I have been able to hang onto her wheel during warm-up and then she takes off and I don't see her until she's cruising back down the hill.  Or she's on a super strict rest day and I am working my ass off.  Anywho, she was also doing the Aquabike so the question was....when will she catch me on bike.  I was hoping to hold her off until mile 5.

I headed down to the water for the start and was planning on doing a quick swim to warm-up but when I put my feet in the water I started shivering.  It was actually cold - my first "cold" water swim of the season!!  So I bagged a warm-up because I figured I would waste too much energy shivering.    It was finally time for the aquabike wave and we all got started without too much jostling at the gun.  I just wanted to get out front and not get knocked around too much and all went fairly well according to plan.  A few of us went off the front and eventually it was just me and someone who was way on the outside.  But I was pretty sure someone went off the front pretty fast and I couldn't see who it was.  I settled into my stroke and concentrated on my breathing pattern.  The waves were 5 minutes apart so there wasn't too much traffic in front of me.  It seemed everything was going smoothly.  U-turned at the buoy and was halfway done.  The exit balloon was getting nearer and nearer and I tried to pick it up.  Really, this was an uneventful swim until the last 25 yards!  As I was swimming for the beach I had an unfortunate collision with another swimmer who managed to knock my goggles off!  That's a first!  I just grabbed the goggles and kept swimming.  Hit the beach and ran to transition.  Swim was in the low :26s.

A quick word about the run to transition.....holy crap.  It must have been a 6% grade in sand.  My heart rate jumped and once in I slowed down to a walk to get my breath back.  Phew!  OK, now I have the bike.

My heart rate was still high starting out on the bike and I was pushing hard to get out to the main road and had to remind myself I had a long ride ahead of me.  Then I settled back and hoped my legs wouldn't complain the entire ride.....embrace the pain!  And then Ang passed me at mile 4.5 like I was riding backwards.  Go Ang!!!  As I said before, the great thing about this tri is that it is more of a locals race and somewhat laid back.  The bad thing about this race?  It's more of a locals race and somewhat laid back.  Meaning that lots of the peeps on the bike didn't seem to know or understand the passing rules in a triathlon.  Lots of riders hugging the yellow line on the left with no inkling that there were riders behind them wanting to pass.  Lots of men out there not understanding the passing rule (i.e. back off once you've been overtaken on the left), and not wanting to get chicked.  I played one heck of a game of cat and mouse with a guy who I will call Google.  I would pass Google on the left and he would come right back and pass me on the right.  Or he would slingshot off my wheel on the left.  It was getting somewhat annoying.  At the turn onto Colfax I passed him for good but then got caught up in another pack o' men.  Grrrrrr.  Just let me go!!!  With about 20 miles left in the ride I decided to go for it and blew by them all and had nothing but empty road ahead of me.

The ride was so nice, the winds were favorable and completely different from the same ride last week.  That ride reduced me to tears because the winds were so bad I felt defeated!!  There were times I looked at my watch and I was going well over 30mph - on a slight uphill.  I kept telling myself...your day is over after this so get after it!!  I pushed and pushed and all of a sudden I was at the rez for the uphill in.  Ride time?  2:28

Even though it was an aquabike, there was still a 150 yard run to the finish so I treated it as transition practice.  I came into T2 with another guy who said he had been chasing me for an hour and had passed me right at the end.  I put on my shoes about as fast as I could and got out of there, passed him back and flew to the finish.  YeeHaw. 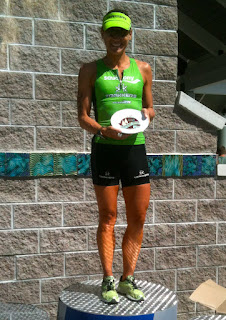 Results???  2nd female overall in aquabike and 1st in age group.  Sa-Weet!!  As I told Chuckie at the end of the race, I could really get used to this aquabike thing!

A huge congratulations goes out to a few people:  Melissa for completing her first 1/2 Iron distance and overcoming some adversity during the run to finish, Richard for turning in a solid performance before Kona, and PIC for her 1st Overall in the tri (not a bad day for TeamTrakkers!).  Well done peeps!
Posted by Michelle at 7:59 PM

Nice job Michelle. Hope your foot feels better. I did the Duathlon. I was disappointed not to have done the triathlon, but I just started swimming the summer. The Trakkers really represented at HM. I love the green kits.