So, as you can tell, this Nationals experience started out a bit differently than I had anticipated.  It was definintely the race I wanted to do well at but had to come to terms that I would not be at my best.  Friday morning me and my roomies (Tyler, Beth and John) got up, put our bikes together, and went for a little ride down to the race venue.  It was the first semblance of exercise I had since Tuesday.  I was still in pain though it was getting better.  If this injury had happened last week? I would have been just fine.  If the race had been Monday or Tuesday?  I would have been much much better.  I felt decent on the bike and had a glimmer of hope.  The river looked fairly inviting so Beth and I decided to jump in (she jumped, I gingerly made my way in).  Ohhhhh, it felt good!  Well, like dirty cool bath water but it felt good.  My stroke was fine except if I over-rotated to the left I had the sharp pain in my hip.  OK, let’s not breathe on that side.  Fine.  I stayed in a bit longer and watched some of the pro field warm-up.  From there we rode the run course and as the temperature soared we headed back to the hotel. 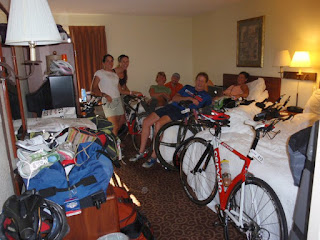 How many bikes and people can you fit in one hotel room? 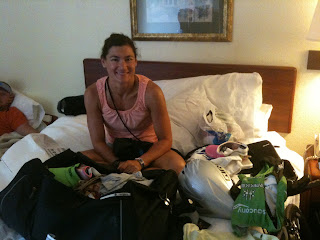 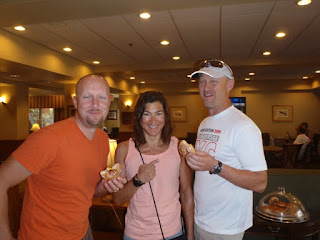 I repeat, I did NOT eat the Krispy Kreme.  John and Tyler?? 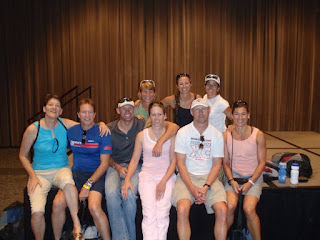 The Nationals Crew
The rest of the day was mellow with packet pick-up and checking our bikes in.  A good dinner at Olive Garden and it was bedtime.  I fell asleep right away - before 9 and slept well!  Saturday morning I was stiff.  But I was planning on at least starting the race.  Beth and I went for our usual warm-up jog and I felt horrible.  I was so stiff and uncomfortable and well, still in pain.  I looked at Beth and told her I didn’t think I would finish....and yes, big tears once again.  I told her my exit plan.....if I finish the bike I would run to the first aid station and make the call.  But I would give myself that first mile.  She asked me if it was a pride thing?  If I couldn’t finish in the top 30 was that why I would DNF?  The answer was no, I just felt horrible, I didn’t care where I placed,  I just wanted to race and I was concerned with my run form so off that I would injure myself even further or come up with a brand new injury and I didn’t want that to happen.  I took a deep breath and accepted that would probably be the outcome.
Swim


As an old lady of 41, I had the awesome starting wave of third to last.....at 8:12.  It was gonna be a hot one in Tuscaloosa - 90+ degrees and 90%+ humidity.  Yeah!!  My wave got in the water (dumbass here decided to dive in....stupid is as stupid does....that hurt) and soon enough we had our hands on the dock and the horn went off.  I was right off the front and felt smooth and strong.  I couldn’t use my legs too much but I could bi-lateral breathe - another improvement.  A couple of girls were in front of me and I was swimming side by side with another in my wave.  Really nothing unusual about the swim this year.  They kept the dam closed and the current was manageable.  There was a bit of chop on the back side of the swim but I felt good.  I could feel the strength in my swim and was very thankful for that.  As I approached the swim exit, I reminded myself that I would not sprint up to transition as normal but would be much more conservative to avoid tripping or anything that might jar my back.  As I jogged up at a snails pace, someone yelled that I was third pink cap out.....sa-weet!!!  And I heard cheering from our awesome support section of John, Priscilla and Michele.
Swim:  22:52
T1:  Yeah, this was a bit slow at 2:08 but honestly, I couldn’t really bend down to get the swimskin off my feet.  I finally got out of the darn thing and got out of transition....but running with my bike was not a pretty sight.  Oh well.  Let’s get on with this thing.
Bike
Legs were creaky from the get-go and I was messing around with my watch because I had somehow hit a wrong button and had nothing on my screen.  I know, just leave it but I was in my aeros fixing it.  I got into my groove and noticed right off that it was pretty crowded on the course - but that’s what you get on a 2-lap course and you are almost in the last wave.  I had to do lots of navigating and passing but once the cobwebs cleared out of my legs I felt good and strong.  And, I didn’t feel my back.  At all.  YEAH!!  So, I decided to just hammer the thing as best I could since I probably wasn’t going to finish.  But one step at a time.  One mile at a time, let’s get the bike done.  The course is pretty straightforward, somewhat flat with a couple of good hills.  And a couple of good downhills!  Thanks to my new cassette there was NO spinning out on the downhills and I know I made up some time there.  I was flying!!!  With about 6 miles left my back decided to let me know it was still around and unhappy.  Whatever.  I kept pushing!  I knew I was doing well and I knew that no one from my age group had passed me.  Boo Yah!  I did a rather ungraceful dismount and realized I was horribly stiff still and "jogged" slowly again in transition.
Bike
1:03:43 23.6mph ave
T2
What can I say about T2?  Other than there was only one bike on the rack!!!  I was 2nd in off the bike!  Total bummer I wasn’t going to finish.
Run
Wow.  Coming out of transition was a lesson in ungracefulness.  I was stiff, my shoulders were up near my ears, and I was straight-legged.  Relax.  Relax.  Just do what you can right now.  Decision time in a bit.  I got into a “slow” pace but a decent rythem and turnover.  I just had absolutely no range in my stride.  About 6 minutes in I decided that the pain wasn’t too bad and I saw the aid station approaching.  What to do what to do what to do.  Then I realized that I was hurting but I didn’t think I was too compromised.  I hit the first mile at an 8 min pace and decided that I could keep that pace and that I wanted whatever the finishing prize was.  The pain was manageable.  I grabbed water and went on my way. 2 girls from my age group had already passed me and I was OK with it.  There was nothing I could do.  But I was going to finish.  The uphills were tough, I slowed to a very slow shuffle.  The flats I felt better.  The downhills were tough too.
Tyler had started 9 minutes before me and I told him if I saw him on the run I would be the happiest girl in the world.  Because it would mean that I was running and that I was going to finish.  I saw Tyler right around 3 miles!!!  I started to smile!!  And I gave him a nice smack on the behind as I passed him (sorry Anne:). Tyler wasn’t having the best of days but he was pushing on.  I was more than halfway done.  And I had gotten a teeny tiny bit faster.  Not much, but a bit.  As soon as we turned around to get to the finish, I felt the sun and heat.  Wow.  It was a sauna!  I kept looking for the shady parts but I was fine.  I told the kids at the aid station to just dump the water on me.  I had 1 mile to go.  My quads were tightening up and I was hoping to not cramp.  But then there it was the finish shoot!!  I high-fived Priscilla and Michele and finished with a huge smile.  I had no idea where I had finished but I thought I might have managed top 10. 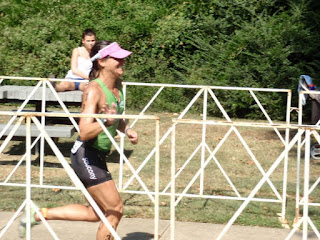 Happy to be finishing!
Run
48:33
I immediately got some ice and put it on my back and got in line to get my official results.  He handed me my sheet and I could not believe what I saw.  7th place in my age group.  And a 5 minute PR.  Holy Moly.  And I broke 2:20 in an Oly.  And qualified to represent Team USA at Worlds in China.  Truly shocked and pleased.
A special thank you to Tyler and Michael for pushing me to get on the plane.  Without them I would have been sitting on my couch Saturday morning feeling sorry for myself.  Instead, I raced (and finished) Nationals. 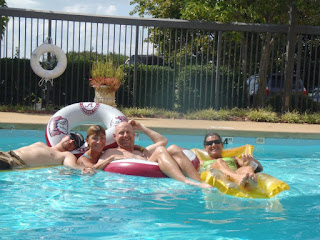 Chillaxin' after the race 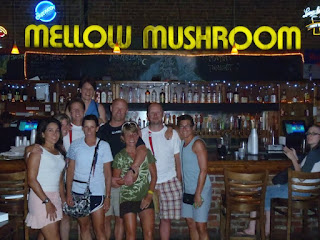 Tasty celebration dinner!
Another huge thank you to mix1 and Justin's Nut Butta for fueling me pre-race, First Endurance for keeping me hydrated during the race, Dr. Ken at Active Care for un-breaking me and encouraging me to race, and Saucony for my great green and stinky (they didn't come to me stinky) Fastwitch shoes.  (In full disclaimer mode, I am sponsored by these companies and I have been using their products/services because they make products that I believe in, otherwise I wouldn't use them!) And thanks to Sydney for letting me borrow her aero helmet and super speedy TYR Sayonara swimskin.
How am I doing a week later?  Pretty good, almost completely back to normal.  There are certain movements that still cause me some pain.  But I’m good.  I’m almost recovered.  And wanna know something really funny/interesting?  I didn’t even notice the silly PF foot during the race!!!
Posted by Michelle at 11:21 AM

Awesome! way to stick with it. 5min PR and a trip to worlds; not too dang bad for being injured!

Aero helmet? Whaaaat?? congrats on such a great race with a lot of adversity.