112 miles, that was next up on the agenda.  I just needed to get out of town, out of the cheering crowds, out of the intense excitement without spiking my heart rate too much.  Chuckie had given me a specific range to work within, a high number to not exceed, and a plan if I did accidentally go above it coming out of transition.  But I looked down at my watch and I was 5 beats below that number, so a smile came across my face.  Good start!  I immediately settled into the bottom of the range.  My plan was to stay towards the bottom on the first lap, mid-range on the second, and try for the top on the last lap.  With a 3 lap course, I also knew that I would need to break it up in chunks to make it more manageable mentally.  But I wasn't quite sure how that would work.  Since it is a lap course, the obvious answer was to chunk it into laps so I concentrated on getting through the first lap.

Within 5 minutes I passed a girl (hehehe does 40-44 qualify as girl?) in my age group.  And I passed her solidly, almost like she was standing still.  A few minutes later, a male pro passed me......which only meant I had passed him in the water with a 10 minute head start.  I giggled about that.  Another guy passed me and said, hey Michelle nice job!  I thought it was someone I knew, but then realized my name was on the race number.  But that was cool he gave me a shoutout.  Then I passed another girl in my age group and I was a bit concerned.  How many women in my age group beat me out of the water???  Focus Michelle, focus....I concentrated on getting to the turnaround.

Have I mentioned that is was windy?  And cold?  And that there was a possibility of rain?  In transition, I decided not to bring my rain jacket since it was sunny at the time. But it was still chilly and I needed to make sure I stayed warm so my body could concentrate on cycling hard and not on keeping warm.  I went with my Trakkers jersey over my tri-top, arm warmers, and compression socks for warmth.  It looked initially like I had overdressed since I saw no one covered as much as I was, but I was warm, not hot, and that was what I needed. 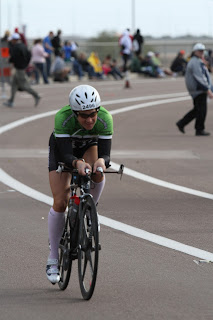 The course is simply an out and back, uphill to the turnaround and supposedly a screaming downhill on the way back.  It is known to be a fast course and I was looking forward to going fast.  On the way out I noticed that it was a bit gusty but I didn't put that much thought into it.  The uphill seemed easy!  Let's give a big shout-out to the taper!  Except when I hit the turnaround, instead of a screaming downhill I realized that the reason the uphill was "easy" was the intense tail wind I had.  Which now meant I had an intense headwind.  Zoinks.  I was struggling to stay above 20mph.....on the downhill.  I remembered some people telling me that the winds here were famous errr infamous for switching directions so I figured that would happen at some point.  I saw PIC heading up and wished I could warn her of the wind.  Mind you, we have been training in the wind for the last few months.  Sometimes with winds so intense that I couldn't take my hands off the bars for fear I would lose control of the bike.  But we figured there was NO WAY the wind could actually be that bad on race day.  Right???  Coming back into town, there was a big flag that looked like this:
The headwinds were brutal.  The crosswinds were brutal.  I was holding my aero bars tightly, not the loose, relaxed grip I normally (without wind) have.  The only good thing that was going on was that I was completely used to grabbing my bottles in the wind and I was staying on top of my nutrition.

The nice part of a 3 loop course?  Coming into town and all the cheering spectators.  I heard Tyler yelling and saw Anne and Michael and Eric was taking pictures and I was so happy to see them!  So many people were yelling my name, I had no idea if I knew them or if it was the name on my butt.  But who cares?  It was so uplifting!
But onto the next loop.  Instead of chunking this part into just the second lap, my next goal was to get to mile 63 and special needs bags.  The wind was still howling and the uphill was once again "easy".  And, once again, the downhill was not easy.  I made it to special needs and the volunteer quickly found my bag and I drank my V-8 and ate half a rice krispie treat.  I also had an extra rain jacket in there but it was sunny so I didn't take it.  That ended up being a mistake a mere 10 miles later when it started to pour.  It may or may not have been hailing but with the winds whipping the rain/hail into your face with gusts up to 30mph who could tell the difference?  It was miserable.  Now there were puddles to deal with and potential slipping issues and avoiding the dangerous white lines.  This ride was starting to get pretty difficult.

The rain stopped as I came into town but with my glasses dirty I had a hard time seeing things in the road and hit a couple of bumps pretty hard.  I thought to myself, that could be bad but then saw the awesome support crew and turned around.  Why is my front end handling so poorly?  Oh no. No.  Noooooooooo! I passed Tyler who was telling me to pick it up and I yelled, Am I flat??  He didn't understand me and Anne thought I said Am I fast?  But I knew.  I had flatted and had little control of my bike at this point.  Ok, let's deal with this.  Don't freak out.  Just deal with the problem.  I got off my bike and looked at the tire (remembering that we bought these tires because they were supposed to be bomb-proof!!).  Are there any obvious thorns?  Any obvious tears?  I didn't see anything.  What do I do?  Change the tire?  I decided to gamble.  There was a bike support tent about 5 miles away and since I couldn't see any damage, I figured that pit stop would fill and seal the tire enough for me to get there and talk to the support guys.  So that is what I did.  And then I rode conservatively to the tent.  Sonja finally caught me and asked what was going on.  I told her I flatted and was heading to the tent.  She said, don't worry you are so far ahead, just take care of it.  She went on her way and I stopped.
The tech guy looked at my tire and we both thought I'd be OK without putting a new tire on.  He filled it up with air, told me where the next support tent was in case I needed it, stuffed the extra tire in my back pocket and I was on my way.   Allright Michelle, get back on your game.  But I was having trouble, I felt deflated like my tire, I was tired, and my back was starting to hurt.  The wind never did change directions and I felt I had lost the will to fight it any longer.  Women were starting to pass me and I had no idea who had passed me while I was fixing my tire.  I was encouraged by the fact I only had 10 miles left on the bike.  I was not encouraged by the fact I would have to run a marathon after I got off the bike to finish this.  And, I knew I would not make my initial goal time.  All of a sudden, this Ironman thing was feeling like a bad idea.  I decided not to think about what came after the bike and concentrated on getting back into town.

Once again, I cannot say enough about the Ironman volunteers.  I got off my bike and someone was right there to take it.  I attempted a "jog" to get my run bag but that didn't happen...I was stiff.  Another volunteer handed me the bag and I slowly jogged to the change tent.  I wanted to cry but I smiled instead and another volunteer complimented me on my smile.....oh if you only knew what I was thinking.  It was sunny as I entered the tent so I ditched the jersey and arm warmers and changed out of the wet socks.  As I was leaving, volunteers asked if I wanted sunscreen and remembering that Chuckie and Sonja said not to get sunburned, I said yes.  Well, as you can see, they caked me in sunscreen!!

Wow, what a ride! Bummer about the flat and the weather, but way to stick to it and get it done!

It was brutal. You did a great job of coming back from that flat. You stayed positive and dealt with the emotions as they came up. Very Grrr!

Can't wait to hear the rest!