Finally, finally, finally!  The girls are finally old enough (and proficient enough) for us all to head to the hills and make some turns!!  Yee Haw!  BC (before children), Michael and I always headed up for a day of skiing on Christmas Eve - the absolute best time to ski....no lines, no on-slope traffic, no lines, no car traffic, and everyone is in a festive and happy mood.  AC (after children), it's been tough to keep up the pre-Xmas ski day.  You know, can't walk, can't talk, can't ski, cries a lot and that whole diaper thing.
With lots of lessons and patience (LOTS of patience) over the past couple of years, this was the year to re-start the tradition.  We packed up the truck with movies and snacks and coffee (for me) and went to the mountains for the day.  I even sucked it up and said yes to Keystone!  (see, I really can't stand Keystone...I have never had a good day there, it's always freezing cold, Schoolmarm scares the be-jeezus out of me, and I just don't like the area sorry Keystone...) 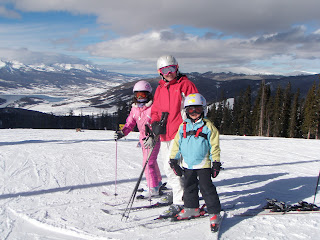 The snow is unbelievable right now for pre-Xmas skiing and the girls did great!  One run down the mountain and they were exactly where they left off from last year.  Charlotte followed me for the first run but then said I could follow her - which was good 'cuz then I could be total mama bear protecting my 5 year old from all the not-so-smart peeps on the mountain.  The girl was working her edges and cruising - way cool.  And, she had no interest in stopping during the middle of a run.  Isabelle got back into her "french fries" right away and then started her hockey stops.
But a kid only has so many runs in her and the bonking began in the middle of the second to last run.  We got them to the top of the mountain and treated it like mile 18 in an Ironman.  As I looked around for an aid station with chicken broth, pretzels, chips, oranges, cola and awesome volunteers I realized that I would have to pay for the aid....sprite and chocolate!  As if you don't pay for the aid stations at Ironman $600! That got them down the mountain but as we took off our skis and started walking towards the car (and yes, free parking is like a mile away), Charlotte called it a day.  She laid down in the middle of the walkway and said she wasn't walking anymore.  Really kind of funny:)
Posted by Michelle at 11:33 AM

What a great day! Kel and I are going to try to get the boys out skiing this year...a little later than you guys (they are 4 and 7) but hoping they will enjoy it!

It made me regret never being on skis. Something about growing up in Manitoba and being non-athletic. (Not that I'm jealous of big brother.)

Got your card. thanks. Love the pictures. the girls are the stars.

As you may have noted, or letter is somewhat delayed this year. It will come eventually.