My new bike!!!!  It's true, she's a beauty and though I fell in love with pink camo initial, black and white is more my style!

The story of my new ride is pretty cool - after being devastated by the crack in my old TT bike I really had no idea how a new bike would come to me.  There are so many great bikes out there - how do you even narrow down the list?  It really is overwhelming.  For a few days after breaking my bike, I wouldn't even look at a new bike which is so strange since I am so into bike porn.  But I eventually got over it and realized that I would be getting a NEW bike and then it was time to look.  I needed to do it right this time and find a bike that was an excellent fit for me - not a used bike that I could kind of make fit me.  Chuckie had several suggestions on brands based on my size and the stack and reach of the bikes.  One of the brands piqued my interest - Quintana Roo!

After crying on my blog about my bike,  I heard from Kristi (check out her blog) who just happens to be married to Mac who just happens to be head of athlete sponsorship at Quintana Roo.  She wanted to know if I was interested in learning more about QR, uh YES!  It just so happened that QR was going to be at Ironman Texas and since PIC and I were going to be there guiding Patricia it just seemed that the sun, stars, and moon aligned.

Now, everyone knows that PIC and I had/have the same TT bike.  And one of my worries when my bike broke was that we were no longer going to be matchy matchy.  But PICs bike was just as old as mine, and really, hers was in worse shape (except for the crack).   So, PIC and I met with Mac on Thursday and got the low-down on the aerodynamics of QR.  We asked all sorts of questions about ride-ability, travel-ability, compact - ability, fast-ability etc.  After spending mucho time with Mac knew this was the right "fit" for us.  On Friday, we rode the QR and immediately knew we HAD to be on this bike - it was perfect!!

From there, we had all sorts of work to do on deciding which components to put on the CD0.1 frameset.  Yes, I could have transferred all of my components from my old TT bike to the new.  But where's the fun in that?  Enter Ryan at Kompetitive Edge.  He worked extensively with both Sonja and I deciding what would be best. 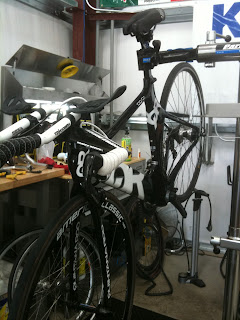 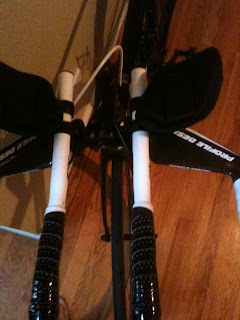 He directed us to these bars based on the fact that he rode QR last year and knew that these would provide an excellent smooth ride.  He researched, made calls, sent emails and texts and within a day - I knew what was going on my ride.  I did use a couple of my old components - based on Ryan's opinion that they were perfectly good and new ones would not make any difference in my life/ride.  I also love the fact that Ryan puts some "personality" into the bikes he builds....white cables, glossy black bar tape, and I can't wait to see the cages that are coming.  He absolutely takes pride in the work that he does!!

And then the waiting.  And waiting.  But, less than a week after putting in my final components order I am the proud mama of this beauty: 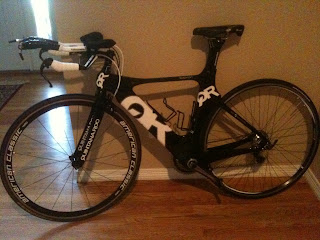 I picked her up today and Ryan was still hard at work making sure everything was ready for me.  Watching him put the drivetrain through a "stress test" was pretty cool.  If I ever have to switch gears like that, I am in serious trouble.  But the bike handled it perfectly.  He also noted measurements and set up the new ride as close to my old fit as possible.  Kind of difficult seeing as how the old vs. the new bike have completely different geometries.  But, he's a genius and set it up great.  A couple of spins around the parking lot, a couple of minor adjustments and wah-laa!

Just in time too, I am racing on Sunday:)!!!  Nothing like a fast break-in on a new bike.  No worries, I did that 2 years ago when I got my new-to-me TT bike.  3 days later....Boulder Peak.  And that went pretty well as I recall so I can't wait to take her for a fast spin!

So, this post would not be complete without a bunch of thank yous!!!  First, a huge shout out to Mac at Quintana Roo.  I cannot tell you how happy I am to be a QR athlete - these bikes are amazing!  Second, to Ryan and Jared at Kompetitive Edge.  I am a lucky girl to have such a great company/shop supporting my efforts this year.  I love going into the store and shop and just talking to these guys.  They are super cool and down to earth.  Everyone I have sent in there has only good things to say about KE!  Ryan does amazing work on bikes - if you are in the Denver area and you have a bike - call him!!!  Of course, I have to thank CV for his research on stack and reach....I was entering the overwhelmed atmosphere and with his help he guided me right towards the QR (there are tons of other things to thank him for but this post is about my bike!!!).
Posted by Michelle at 4:08 PM

Always a silver lining!! So happy to be matchy matchy again!