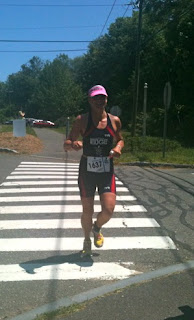 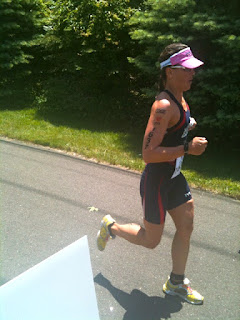 Finally, the end was in sight.  I was very happy with my run!!  Tough race but I'm glad I trekked out to Quassy for the event. Initially, it looked like I was a bridesmaid once again.  2nd place in my age group.  But it turns out the woman who took off at the start was 3rd overall so I got bumped to 1st place!  Coolio! 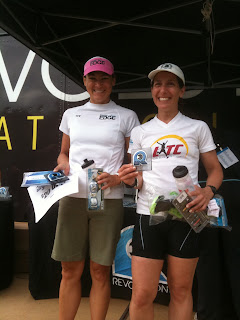 A big congratulations to Angela Naeth who took 3rd Pro behind Julie Dibens and Mirinda Carfrae!!


A huge thanks to Kompetitive Edge for all of their support!!  And to all of my fueling and everyday nutrition sources :mix1, Justin’s Nut Butter, Love Grown Granola and Nuun - thanks for keeping me going:)!!!
Posted by Michelle at 4:13 PM

Nice RR Michelle! Congrats on an awesome race on a tough course.

Hey how do you do the Pre-race on the run? I wanted to do that for that extra kick - but couldn't really figure it out. Do you mix it with water & put in EFS shot tube?