I finally did it.  I raced the Boulder 70.3 - a race that I'm pretty sure I swore to NEVER race!  I mean really, who wants to go race at the Rez?  It's not that the swim is bad - it's not.  It's not that the ride is tough or bad - it's not (in fact, it's quite fast), it's just that Boulder Rez tends to be hotter than fire on the first weekend in August when the race is held.  Which translates into a very hot exposed run.  Because there is so much shade at the Rez (NOT).  Sonja and I decided to race this after qualifying for Kona - it's a tough, hot race and well, that seems like really good race-prep.  And, Angela was racing too so it was just going to be a cool day with the girls.

It had been a full 6 weeks since Loveland and honestly after my pain-filled shingles July, I was a bit apprehensive about racing.  I wasn't excited about Loveland.  I was tired and totally unenthusiastic - and that is not really me.  But for this race?  Was I ready?  Was I recovered enough?  I had only just finished my anti-virals earlier in the week so who knows what kind of effect that would have.  But by Wednesday after just a couple of rest days, I started thinking about the race.  Good thoughts.  About how I would swim.  About the bike course.  And I realized, I was ready.  I was excited and that meant (to me) that I am well on my way to being fully recovered!!!  Yip Yip!!
So Sunday morning came very early.....the alarm went off before 4.  Yuck.  And I was having a dream that I was dreaming and my alarm went off and I couldn't wake up.  And then my alarm went off and I was having that dream and I had a really hard time waking up.  But, it's race morning and that means full octane coffee!!!!  Sonja and I drove up together and did our thing which always helps me stay calm and relaxed.  I didn't really feel any major nerves, just tinges of excitement.

My wave was early - 6:45.  Which was AWESOME!!!  The wave in front of ours started 9 minutes ahead so that meant clear water until the first buoy.  I settled onto some feet in front of me and a group of 4 or 5 of us led our wave out.  Thank you race director for NOT setting us off directly in the sun - sighting was relatively easy and the water felt good.  After the first turn buoy, one of the swimmers I had been drafting off of fell off pace and then just kind of disappeared and it seemed I was the lone green cap in the all of the yellows.  I really felt pretty good in the water.  I just swam in a swim skin, and I loved really feeling the water rather than having a wetsuit.  Don't get me wrong, I love my wetsuit but there is something that I just love about swimming "naked".  I was singing a few different songs (and not the song Son tried to get stuck in my head - HA take that Lola the showgirl!) and was generally in a great mood.  But, the buoys seemed to go on forever and we finally made the final turn towards shore.  Then I saw another green cap ahead of me so I tried to get on her feet.  She got out of the water just a couple of seconds ahead of me.

Then it was time to accessorize - that's what T1 in an Ironman is all about...put on my garmin, number belt, sunglasses, nutrition, helmet...is it buckled....what did I forget??  Oh yeah, my bike!

Bike time!!!!  Oh, I was looking forward to this bike - finally taking my QR CDO.1 for a fast ride and seeing what we could do together (by the way, I need a name for this fast thing - any thoughts???).   I was supposed to settle into the first lap and then build into the second.  But I was so freaking excited to be on the course and in a race that I pretty much just blew that plan out the window.  Not to mention my own personal cheerleading section as I was getting on my bike.  I beat the first green cap out of transition but then she immediately passed me on the way out to Jay Rd.  Game on!!!  We played cat and mouse for a bit but then I let her go as I let my tummy decide if it was going to rudely eject all contents or allow them to stay in.  Blech....they stayed but then I just started belching.  Loudly.  For 56 miles.  Awesome.  Well, I wasn't about to let a little tummy distress slow me down especially when my legs felt so darn good.  My watts looked good and I felt strong and I passed green cap again on 36.

I wish I had a picture of St. Vrain road as I was speeding along.  Being in such an early wave, and probably passing a lot of people in the swim meant very, very open roads.  I looked up and only saw 2 other athletes on course.  It was peaceful.  And fast.

There's a quick out and back before heading up the diagonal and it was a great opportunity to see who was with me from my age group.  As I turned around, it looked like only one girl and she was a couple of minutes down.  Hmmmmm.  Am I going too hard???  I finished up the lap and it was time to see how I would do on the second.

But the second lap was much like the first!  My legs were with me and though there was more traffic on this lap, it also meant more company and more bogies on course.  I kept my cadence high and my eye on my watts and heart rate.  Everything seemed to be going well!  At the final out and back, I saw no one in my age group....confirmed.  I was flying!!!  So I figured I must be first or second depending on if anyone was ahead on the swim.  I was pretty confident there wasn't but you never know.

I headed back into transition and heard my cheering section - Michael and the kids, Helen (Eric was taking pictures), Lesa, Ken and Joey.  I felt good but knew my tummy was a bit sloshy and not exactly what I'd like it to be feeling.  Even though I wasn't hot yet, I hit the water, ice and sponges on my way out, waved and smiled to my family and friends and started my run. 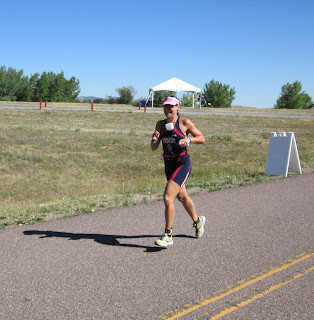 This run course is so brutal!!  Not an ounce of shade and 2 hills in the first 2 miles that are just horrible.  My mood was still positive and I smiled at all the volunteers and kept running.  The miles ticked by and I was basically all alone out there.  Chuckie and Jeff were out there cheering too.  CV had some words for me and I listened but was secretly really hoping he wasn't going to follow me!!!!  Right before the pavement started, the coolest thing EVAH happened.  The first place women's bike passed, and then Angela slapped me on the ass as she passed by!!  Holy Moly....she was going to win this race!!!  I was so extremely excited for her!  It was really great to hear the announcer's words at her finish and as I ran by I also heard her speaking and choking up.  I choked up too but I still had another lap to run and had to focus!!

And then it happened.  Uh oh.  I have another lap to run.  And it felt like my legs were suddenly made of bricks and that I could barely lift them off the ground.  This isn't good.  Ok, Ok.  Drink gatorade (or whatever sugary drink they are offering), maybe try some coke.  Oops.  No coke, it came right back up.  Water, ice.  It was getting hot.  I wasn't quite as enthusiastic as I passed my peeps this time around.  But I managed a smile.  Just keep running.  Just keep running.  Those hills almost beat me but I kept running.  At mile 11, another gal from my age group passed me.  Darn it.  I had no response.  She got ahead of me.  But not that far.  I tried coke again at the next aid station.....STILL not working.  I spit that right out.  Finally, the last aid station, signaling the last mile.  I passed her during this aid station and didn't realize it.  She passed me back.  Stay with her!!!  Ugh.  Another lady passed too but I wasn't sure of her age - calf sleeves and arm sleeves so no number.   KE teamie Katy was screaming at me to just finish it up - only half a mile left....so that's what I did.  I seemed to be reeling that one lady in and I thought just maybe I could pull ahead of her on the downhill and hold on to the finish.  Nope.  Not quite.  She heard me coming and put on the afterburners.  She beat me in by 7 seconds!! 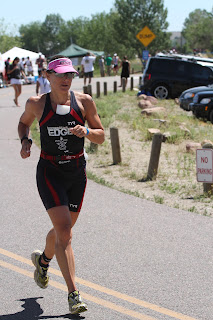 I gave it all I could though and am very happy with the effort!!  I ended up 3rd in the age group, and had the fastest bike split in my age group. 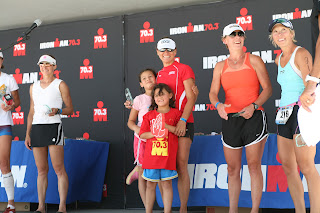 It was an amazing day and it was great racing with my friends and KE teamies - they are simply a great group of people.  A huge congrats to my athletes Cody, Peter and Bret on their races - I am a proud coach!

I also cannot thank my sponsors and supporters enough.....Kompetitive Edge and TYR, QR, Nuun, Love Grown Granola, Justin's Nut Butter.   A huge shout out to Ken at Active Care for keeping me going and Brad for massage!!  Of course, none of this could happen without Michael and my girls.  I am so dang lucky for getting to swimbikerun and race.  And these people help me do it and I cannot thank them enough.

There is work to be done over the next 9 weeks but I am exactly where I want to be physically and mentally right now and I'm ready for the work!!

I'll follow from a greater distance in future races!!!

...and now *I* have Copacabana stuck in my head...right before a 90 minute lunchtime swim. Thanks a LOT, Michelle. ;-)

Seriously though, awesome job! You are a beast!

Congratulations on your podium finish. I'm happy to read you're back to your winning ways!

Congrats on an amazing race! Can't wait to cheer you on in person in Hawaii!