Coming out of T1 I immediately saw my family (parents, sister, hubs and kids) - thanks to those awesome Kompetitive Edge red shirts - and waved and said Hi!  And those 2 seconds were going to have to last me for the next 5++ hours.  Left turn on Kuakini, feet in shoes, hit big bump and for the first time ever in a race, I lost a water bottle.  Crap.  I didn’t dwell on it but in the back of my mind I knew that my First Endurance EFS bottle was around 150 calories and had 3x the electrolyte count as the Perform on the course.  Not a big deal right? 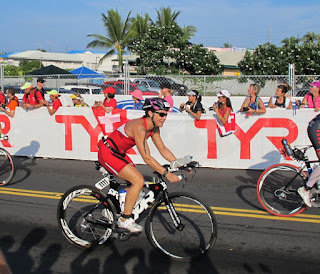 My heart rate was right about where I knew it would be coming out of transition and starting out with the crowds - it is just so darn exciting that I really have to work on keeping my heart rate down.  Michelle (Mama Simmons) came up from behind me and I asked her what time we got out and she reported an hour.  Meh.  Not bad.  Not great.  I passed Nalani too pretty quickly and saw a couple of other girls I knew were fantastic swimmers so to be in the same zip code as them on the swim.....I’ll take it.  Once out of town I applied some sun screen where I could - arms, shoulders, tops of thighs.  Then I tried to grab a bottle and it slipped right through - hadn’t thought of that.


On the Queen K I could not believe how many people (mostly guys) passed me in the first 20 miles.  It was stunning and I hadn’t really prepared myself for that.  but that's what happens when you are at the World Championships right?  The best of the best.....if you think about it the majority of athletes had to win their age group or be top 3 or 5.  It made sense to me that these guys gunning for 9 hours were passing me:)  But it still was a bit of a strain on the 'ol ego.  Plus, the power tap on the rental wheel was only working intermittently so my power numbers were plummeting and I wasn’t getting an accurate reflection of my output.


Now here's the dirty little Kona secret that nobody ever talks about......the Kona draft-fest.  I was SHOCKED at the drafting.  There were big groups and small groups.  Mostly men but lots of women hanging on the back.  At one point, a group of 25-30 went by me as did a ref on a motor bike.  I wondered exactly what that ref was going to do.  And no one in the pack seemed compelled to back off or get out of the draft zone.  But there it was - Clearwater-esque drafting.  All I could hope was that I'd see a full penalty tent in a few miles.
.
Of course, when I went by the penalty tent there were only a handful of athletes in the tent rather than the hundreds that should have been in there.  And so it went from there.  I kept thinking I was super-duper slow but was in my appointed HR zone and I wasn’t going to blow up that zone.  I was right on my nutrtion plan through two hours and finally felt like I had legs at the turn to Kawaihae.  The climb to Hawi is just my sort of climb - gradual, not too steep but something I love to power up.  A few miles outside of Hawi we encountered a wicked head wind that slowed me down to what felt like 6 mph.  Argh.  But I just smiled to myself and enjoyed what Madame Pele had to offer....I was in Kona!  At that point there were a couple of crosses that I decided to not be in aero and sit upright.  I wasn’t comfortable with reaching for a bottle so I went for a bit of time without drinking and/or nutrition.  I didn’t think that was a big deal at the time.  I also remember thinking what Keith had told me.....pee before Hawi.....and I did not have to pee.  No worries though, I'm sure I'll have to pee soon.  Right?  (for those counting.....under caloried at breakfast, lost an EFS bottle, and didn’t take nutrition for 20+ minutes, no peeing)
Special needs seemed to be a clusterfk and they didn’t have my bag.....c’mon!!  Where’s the bag?  Of course, I had tossed all my empties in anticipation of my bag (note to self:  don’t do that until you have said bag in possession) and was starting to panic - what if they don’t find it?  Finally a volunteer came running up with it and I loaded my bottles, grabbed some sport beans and left.  All told, it was probably only 1.5 minutes but it felt like forever.  Downhill and WHEEEEEEEE an amazing tailwind that I continued to pedal through passing people on the left.  I had a Sonja sighting on Kuakini a couple of hours earlier and I was excited to see where PIC was now at the turnaround.  She was only a minute or two back and caught me right before Kawaihae.  As she passed we connected, had a brief update of each other's day (VERY brief) but I always get an emotional lift when I see PIC on course.:)

All of a sudden (as if 4 hours is all of a sudden) I was at mile 80.  I’d felt decent through this point although I knew I wasn’t having the bike of my life.  But the realization that I had been drinking regularly and had yet to pee....I knew that was trouble.  I was trying to will myself to pee but it just wasn't happening.  Not good Michelle, not good.  And like a light switch turning off, I felt like crap.  My back was tight and sore and I had to sit up a bit more often to try to loosen it up.  I didn’t feel strong anymore and was kind of weaving along the Queen K, feeling, well, not quite right. 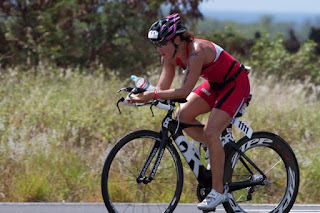 It was hot.  Now, don’t get me wrong. I knew it was going to be hot but I don’t think there is any way to really prepare for Kona hot.  You can overdress as much as possible but in September in Colorado even if it is 80 or 90 degrees, you know it's just not as hot as July.  There is a chill in the air.  The sun was radiating off of the black top and it felt like I was riding my bike in a sauna.  With a horrible hot blow dryer in my face.  The head wind was getting on my nerves and I wasn’t thinking too positively about Madame Pele anymore.  Where I was laughing into the wind up to Hawi, I was now cursing it.  I felt weak and my speed decreased considerably.  And now I really starting getting passed.  And passed. And passed.  The last 12 miles took forever.  My goal time was going down the drain.  I also noticed what looked to be a wicked sunburn on my right forearm - apparently I had missed a spot.  My skin on my back felt hot (remember the sunscreen denial in T1??) and I was thirsty even though I was taking in every possible liquid I could.


And then I was riding towards transition - complete sensory overload with all the crowds, handing over my bike and running to the change tent.  The bike was over, I was 2/3's done with my Kona race.
As a final note on the bike, I felt pretty lucky having the race number 1111.  If I had a dollar for every time someone said - cool number, great number, lucky number - I tell you I'd be staying at the King Kamehameha hotel:)  Thanks everyone for the shout outs!!

You know we have barely even talked about our races to each other. It's crazy to read the details. You did good PIC, you held strong. I am proud you're my PIC.

Thanks for the race details and telling it like it IS, instead of glamorizing the WC course!! :) You rock!

Awesome job toughing it out! Have definitely been there though - the "PLEASE pee, PLEASE pee" chant during a HOT race. (That one ended with me in medical with an IV and a barely-readable blood pressure.)

If it's any consolation, your "not-so-good" bike would be MY average. In the local 8 mile TT. On my BEST day. Great work out there in the lava fields!