I totally meant to put this one up last week......but hey, a week later isn't that bad right???

What to do, what to do....an hour fifteen run to be accomplished and the snow is falling!  Friday morning I woke up to, like, 9 inches of snow on my driveway and drifts 3x that big on my street.  School had been cancelled the night before and there was also a ride on the schedule.  And, of course, I left my bike and skewer at PIC's (she has the ultimate sweet/sweat trainer room!!!).

The snow kept falling but I had an opportunity - take Michael's 4-wheel drive, rescue the bike, and go for a snow run!!!
It's pretty cool to be able to run outside even in a winter storm warning!  You had to be dressed for it....yak trax, 2xtights (wish that had been me), wind vest, several layers, hat and gloves.  Prepared!!  For the first time, I brought Kona my doggie on our run - she was thrilled.

Off we went and it was blowing!!  You don't really ever notice the wind until it's coming straight at you and it was cold (zero degrees???  negative something or another??)!  But no worries, onward! 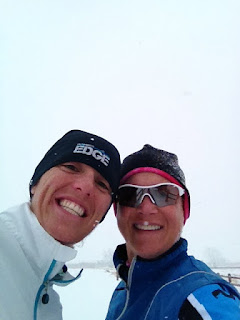 Anyway, it turned out to be a fabulous run.  Cherry Creek Rez was deserted - we saw like 4 cars total the entire time we were out there (the car occupants looked at us like we were nuts).  So the three girls ran in the middle of the road - it was iced over with little snow drifts.  Kona was such a good girl!!!  She's turning into a great little running dog, she lead the entire time and kept a great pace.