This past weekend was all about how to cram as much "life" as possible into a mere 54 hours in New Orleans.  PIC and I were determined to squeeze every last drop of action/eating/racing/fun into those hours!  See, we didn't arrive until midnight on Friday.  With a race Sunday, well, that's a quick turnaround.  Since I'm a big believer in the "best sleep 2 nights before the race", this late fly-in comprised my normal state of being in bed at a totally reasonable hour.  But when you have a free ticket on Southwest....well, you lose some sleep!

After getting a decent amount of sleep, it was beignet time.  I have been thinking about beignets since about the time I signed up for this race a couple of months ago.  Beignets beignets beignets....so up and at 'em and before we do anything else, it's off to Cafe du Monde for BEIGNETS!!!  Oh my, they were every bit as good as I had hoped. 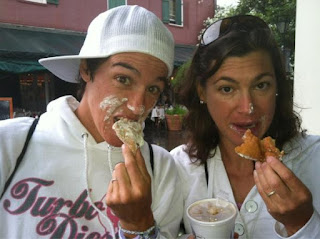 From there it was shopping at the French Market - so cool.  Found some fun masks for the girls and some t-shirts for PIC and me.  It was raining and although I wanted to explore the city more, it was time to go to packet pick-up and build my bike.

There had been a big question mark about this race for the last few days.  The weather had not been favorable during the week and was not getting any better approaching race day.  NOLA had cancelled the swim last year and it was starting to look as though we would have a repeat of that scenario.  The wind forecasts were ridiculous!!  Rumors were going around that the swim had been cancelled but I figured that until we heard it from race management directly, I wasn't believing anything.  Sure enough, 20 minutes later, the race director sent the email.....the race was now a duathlon with a 67.1 mile distance:  2 mile run, 52 mile bike, 13.1 mile run.   My very first duathlon.

Now, lots of people have been asking me how I really felt about a tri being changed to a du.  But, really, there is just not that much to say!  I respect race management's decision to cancel the swim - the water looked really ugly in the afternoon.  And there was storm debris on the course which led to the shorter bike. The last thing I want/need to do is complain and/or stress about something that is NOT in my control.  Yes, I was disappointed that this meant I was probably out of the *running* for a Vegas Worlds slot.  But maybe not, my run has seen lots of improvement the last several months.  So I knew that whatever the day brought I would race as hard as I could.
Anywho, the rest of the day went great!  I was a bit tired and managed to get a killer nap in and kept up with the good eating.  Bike check-in and dinner and time to get the rest of the bags ready.  And, time for the first firedrill of the year.  It appeared that for some reason my heart rate strap did not make the trip.  Which is so unusual because that thing is pretty much strapped to my body all.the.time.  But it's 8:30.  On a Saturday night.  In New Orleans.  The pit in my stomach dropped and the panic set in.  Ok, Ok, Ok, breathe deep.  I told Son and her mom and those 2 are just the BEST!  We started searching for sports stores and making phone calls and within minutes we set out in our jammies for Sports Authority.  Yikes. An hour later, we were back and I had a new HR monitor and strap in my possession.  Once again, a pre-race issue that was easily solved by throwing just a bit of money at it:)

Pre-race nerves didn't set in until the strap situation.  And from there, I was a bit nervous.  I still slept fairly well but was ready to DU this thing at 4:30am.  Let's go!!!