After a disappointing swim - well I wasn't even that disappointed more in awe of what I had experienced - I couldn't wait to go for a nice long bike ride.  A new coach this year and a new schedule and a new taper.  I had been feeling good to this point so what could this bike yield?

The course was made for cyclists like me and PIC.  I mean, we eat hills for breakfast on most days!  There is nothing I like more than climbing (when I'm fresh of course).  So with my mocha liquid shot stuffed down my top and arm warmers on, I made my way out onto the bike course.  And wow, what a first mile!!  Yes, it's a mild uphill but with spectators lining both sides of the street yelling and cheering, I just had a huge smile on my face and was so happy to be doing this race......thank you spectators for the love:)  Heading out of town, I finally realized why there was so much chop on that second swim lap - the wind was howling.  Really?  Good to know the weather forecasters in Spokane/CDA were just as inept as the ones in Denver.  Thank goodness I put on my arm warmers since it was cloudy, windy, and spitting just a bit of rain from the sky. 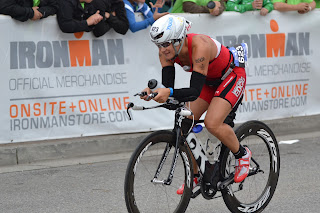 My legs did not feel great those first 20 miles or so.  Damn, I thought, the taper was 2 days too long!!  But I wasn't worried,  I was just happy to be on Oreo (drop dead sexy fast Quintana Roo CDO.1) and out riding a tough course.  The first out and back I tried to count how many women were in front but I only really remember seeing teamie Katie and her huge smile, waving at me saying Hi Sonja!!  It looked like I had some girls to hunt down.  After heading through town, the course takes you on an out and back on what seemed to be some decent uphills and  a few fun downhills to break it up.  Nope.  That course was straight uphill to the turn around with 1 or 2 very short downhills.  Wow!

There wasn't too much drafting on course.  There were a couple of sections that got a bit congested but hills have a way of spreading folks out.  One of the girls in front of me was drafting behind a pretty big (maybe 5?) group of men.  I mean, she was right on their wheels not even really trying to hide - I tried passing her and the guys but unsuccessfully.  They gobbled me up again.  I let them go and just watched the draft fest from behind.  Then I noticed the guys finally dropped her on a hill, she was all by herself on the hills and I was reeling her in.  I finally successfully passed her and later found out she received a penalty so I never saw her again.  I did, however, see lots of the men that had passed me early on later in the ride.  Oh, you men.  Is it really such a big deal to be passed by a woman?  I myself almost got a penalty for taking too long to pass but escaped with a warning since the guy I started to pass sped up......grrrrrrr.  I spoke with the official on the motorcycle and he had seen what had happened so I graciously thanked him and let the guy go.  Not worth a penalty.  Of course, about 10 miles later I saw him again and this time successfully executed the pass:)

My legs felt unbelievably strong.  My heart rate was unbelievably low.  My nutrition was spot on.  My QR was shifting beautifully and was looking for speed.  I even peed on my bike (success!!!).  I never felt.....tired.  The initial achyness I felt starting the bike was gone.  When I stood up out of the saddle on the climbs I felt like I could climb forever - that is such a rad feeling.  And it appeared I had made up some position for the women.  I could really only see a couple ahead of me.  After mile 70 I was pretty much on my own which can be tricky to stay motivated.  A girl passed me around 80 and said nice riding which was cool......that gave me a bit of a pick up so that after a few minutes I knew I could take her on a downhill.  See, PIC and I can descend.  Pretty much like bats out of hell.....we like to go fast and take some risks.  It's fun to do and it can really pay off in a race.  So on this downhill, away I went and didn't see this girl again til the run.  Mile 90 and the final turnaround to town.  Legs were still with me and I had to pee again.  But it just wasn't going to happen on the bike.  Hydration - good, nutrition - good.  One last big hill and it was time to run!!!

Did I mention I really liked this bike course?  The roads were all well-paved with no "surprises" and no gravel/dirt.  It was well marked.  There were 2 no pass zones that while I hate being not allowed to pass, it was clearly for the safety of the athletes.  And they weren't that long.  The course seemed to be well monitored by officials and it seemed that the mechanic guy was always pretty close (thankful I didn't need him).  And the spectators.  Thank you for making me feel like a total rock star!

T2
Transition was uneventful and the tent was empty.  I had 2 (!) volunteers helping me which was good as I was trying to put fresh socks on over my wet socks.  D'oh!!  Quick stop at the port-potty, sunscreen application (Skin Strong for the sunscreen - love that stuff) and it was off on the run!
Posted by Michelle at 10:28 AM

wow!!! you SMOKED that bike! holy crap girl!! nice job. sounds like it was an epic race for you. can't wait to read the rest. ditto on the dudes. drives me nuts!