I've got lots of time on my hands these days so pull up a chair, pour a large cup of coffee or crack open a beer or electrolyte drink, and get ready for a long one.....

After CDA, I was ecstatic to do nothing, nada, zilch, not a thing for at least a week.  The Dirkinator had suggested sending a schedule out on the Thursday after the race and I politely declined.  A full week of no training and just recovering was what I needed.  And it was just a bit more than that too.  The reality of starting IM training again.  So soon.  I hadn't factored that into my Kona goal.  Just one week.  That's all I wanted for a mental and physical recharge.  Well, more mental since the recovery process is still in the works!

Sooooo, what does one do without a full training schedule?  And kids out of school?  Playtime!!  Once I was able to walk (ha), the girls and I did some fun hanging out.  Movies, Jumpstreet (I watched, not jumped), WaterWorld with PIC and Annie, Dairy Queen, frozen yogurt (will this heat wave ever end), pool time, water balloon fights. It was fun!!
Then a week later it was time to start getting back into the training frame of mind.  A run and a bike that day were nothing less than UGLY.  The next day's run was a bit better and my swim felt OK.  I knew it was going to hard to get going again mentally but the first 2 days were brutal.

Last Thursday, PIC and I left home for Portland, OR to join the awesome Rev3 team to get the Rev3 Portland event set up for Sunday's Olympic and Half races.  I had the opportunity to work with this amazing crew back in May for the Knoxville race and though I worked sooooooo hard, it was an awesome experience.  So I was really looking forward to this trip.  The staff are top notch and it truly feels like a second family.  Plus, for this race I was assigned new duties - Bike Course Coordinator.  It sounded fun and a bit challenging because really, I know how to RIDE a bike course, not SET up a bike course!!  By the way, if you haven't participated in a Rev3 race yet - why???  You are missing out on a fantastic event!!
But this trip had more "excitement" than I could have possibly imagined.  See, on Thursday night as I lay down in my hotel bed I experienced something that has really never happened to me.  Like, severe pain in my abdomen.  So bad that I was unable to move, roll on my side, get out of bed and take deep breaths.  PIC was asleep in the next bed but I knew she needed sleep so I just lay there whimpering.  About an hour later, the pain finally let go enough for me to fall asleep. The next morning came around and though my side was sore, I was able to get to work.

But Friday afternoon it happened again as I was driving the course with my fellow course coordinator Tony.  I didn't let him in on what I was experiencing and he probably thought I was just getting lazy since I was no longer putting out signs and marking arrows.  Once again, an hour later it released and I was kind of OK.  PIC put in a call to her sister-in-law who is a resident at a hospital in Oregon and I spoke to her about my symptoms.  Gallbladder is the term that came up.  Google gallbladder and the symptoms listed were quite similar to what I was going through.  It was decided that if it happened again, I would head to the ER.

Unfortunately, Saturday afternoon brought the same issues but this time they lasted....for several hours. And that's when PIC's and my relationship went to the next level.  Our first trip to the ER together!!  Now, we always have a good time together and we always can laugh at any situation but laughing made me hurt!!  And it was almost impossible to not make me laugh in this situation!!  The "eye candy" in the waiting room was just too much - trying to figure out people's stories.  But as soon as I start to laugh she would say "dead puppies" as if that would make me stop laughing.  Fun in the ER.  Oy.

To thank PIC for being there with me in the ER is really just not enough.  It's kind of scary when you don't know what's going on but she made it bearable.  She was exhausted from working and we both knew it was going to be an incredibly long night/day without sleep.  But she was just smiling, tucking in my blankets and taking awful pictures of me.  Plus I think she really enjoyed seeing me on morphine.  Thank you PIC:)


To make a long story not as long, blood tests, ultrasound, chest X-ray, and 4 hours later......it was determined my gallbladder was just fine.  Discharged with some awesome pain meds.  And absolutely no idea what was wrong with me.

We got back to the hotel at 3 in the morning and I was meeting Tony at 5 to drive the course again.  And PIC had to be up just a few minutes after that.  There was really no question of me not working.  My gallbladder was fine, the morphine was still working its magic and there was a race to put on.  Suck it up buttercup!

On the bike course, some lovely individuals did some work the previous night.  Some signs had been re-located.  Duck taped arrows on the ground had been pulled up.  Caution signs were taken down.  Even more fun were that some directional signs had been replaced with signs that had arrows going the wrong direction.  That's the reason we drive the course in the morning.
After the race the clean-up starts and let me tell you, that is where the real work begins!  Even after 1.5 hours sleep, I was ready to work.  It's amazing what adrenaline, lasting morphine effects and caffeine can do to keep you going.  But that's when Eric (race director extraordinaire) put his foot down and sent me back to my hotel room.  That's pretty much my worst nightmare - being sent home because my body isn't working correctly. So while I didn't like the instructions, I filled my pain med prescription and went to bed.

Now I'm back home and have seen a couple of doctors and have some answers.  My gallbladder is fine.  My pancreas is fine.  So are my kidneys and liver.  But there are some muscles in that area that are not fine.  Going back to the swim portion of CDA, I breathed to the right every stroke.  Something I NEVER do.  I'm a bilateral breather but the conditions at CDA and my condition at CDA caused me to change my stroke.  And that really pissed off my ribs, external obliques and intercostal muscles.  They are in spasm.  They are incredibly tight - like a tendon.  And since they are somehow connected to the ribs (I'm not a doctor, I just play one on TV) it is causing my breathing issues.  Of course, these are also the stabilizing muscles in your core so it pretty much effects every movement.  Cool huh? 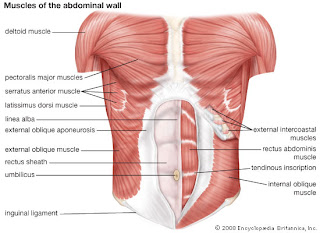 I'm due for a CT scan at the end of the week for some other checks and am on injured reserve currently.  I'm trying not to freak out and have already written off Boulder 70.3.  I was allowed to do 20 minutes on the stationary bike yesterday.  Today may bring (wait for it) an HOUR on the trainer!  Maybe even ride my bike outside tomorrow!  No swimming or running yet.  And if all goes well, an outside ride Friday!!!!  And maybe, hopefully, please please please, I'll be able to resume real training soon.

Now you know why I have so much freakin' time to write such a long post!!!
Posted by Michelle at 8:06 AM

Awww PIC, we did have fun in the ER didn't we. Can't say I'll ever forget that one. I'm so glad you are keeping your gall bladder and that you just need to heal. That's the most important part. Health First, always. When we are sitting in Kona, you will barely remember this set back, I promise!

Congratulations on qualifying Kona! Hope your core heals quickly and you feel better in plenty of time...

Acupuncture. Put some moxi in those muscles.

AH! NOT that it is good you have this, but I had this last year! I ONLY breathe to the RIGHT SIDE...and I was swimming a ton and must have been dehydrated (I was sick the previous week) and BAM I was in so much pain I could not figure it out either.

I was actually in the LAKE and my lovely husband brought me back to shore.

I could NOT figure it out but eventually figured out it was a spasm of the QL and intercostal....and it hurts like a XXXXX!

I was in bed for a day or so and finally got a massage and rested and it released, but took awhile...and then it did come back again, so be super diligent with that...it is a tightness in the neck that travels down the kinetic chain and to the intercostal/QL....

BUT then it went away and never came back. SO rest up, heal up and get better!!! :((
YOU WILL!

Oh Michelle! If it is the intercostals, I totally feel your pain. After a bike accident several years back I had some intercostals spasms and it literally would take my breath away - very, very painful. But it eventually healed and it never came back! Thinking of you lots and like Sonja said, sitting on the beach in Kona, you won't even remember this set-back. Heal up!!

I was so worried about you last weekend - glad to hear non of your vitals are jeopardized, but still sucks you're going through this. :( Again, one of those things that most of us would never know, yet when you talk about it, you find others who have been through it. Hang in there, chica! You're on the (kona) road to recovery (kona)....(kona). :)

I've been reading through a few blog posts today Michelle, and honey I love it! You have a great way of pulling me in and giving me reason to read more. thanks for the motivation!

Interesting... I've heard of that but never experienced it?! Hope you get it to release! If it's a spasm though i'd say that I've had really good success with acupuncture for getting stubborn spasming muscles to release!

First of all, congrats on IMCDA!! Just got through the RR. Second, I hope you are feeling better and healthy soon! This totally sucks, but you can use this time to really soak up a lot of rest and sharpen your mental skills!! Sending healing vibes your way!

Sucks you ended up in the ER but nice to know all the vital organs are in good shape for Kona :-).

I like what Hilary suggests - acupuncture. I've used it to help manage the tightness from my muscle atrophy.

Also it is really interesting because I have had spasms in and around my chest and stomach following long efforts, I've always assumed it was just related to my nerve disease, and your post makes me think that it is actually my diaphragm and intercostals. Thanks for sharing this! Any stretch tips you have I'd also appreciate!