Coming out of transition I was wondering where my body was at.......was I sore?  Stiff? Tired?  Hurting?  By the time I hit the street, I knew I felt pretty good - I had decent legs.  But I had a big task at hand.  Run the marathon.  One of my top goals for this Ironman was to just run the marathon.  No stopping, no walking, no wimping out.  And that's a tough order!  I was basically asking myself to ignore every single ache and pain and discomfort and whatever else to keep moving forward.  The body just begs you to stop during the marathon and put an end to the craziness. How tough could I be today?  So far, I'd had an "interesting" swim and a great bike.  I needed to nail this run to secure my Kona slot.

The volunteers told me I was 3rd in my age group coming out of T2.  Clearly I had miscounted on the bike.  Oh well, there goes that slot!  But, the finish line was still 26 miles away and a lot can happen during that time.  So I ignored that and got to the business of running.  Yes, my body felt good, as in I could run, but I did not feel good.  I could tell I was going to have some tummy issues to deal with.

Once again, I was running up that awesome spectator lined street.  There was all kinds of cheering going on and once people figured out I was a girl I got all sorts of love.  I guess I need to wear more pink - the Newtons aren't enough:)  After the first mile, I got some clarification on my status.....I was third overall age grouper.  OK, I like that!!  But no matter, I need to run and not think about my placement or what it may or may not mean. 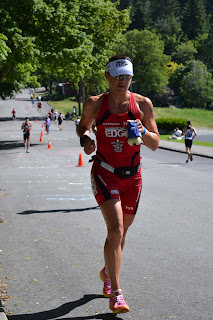 The run course is beautiful.  Starts out in town, then winds around a neighborhood and ends up on a path next to the lake.  There's a nasty steep hill that would have to be dealt with twice.  Miles 1 and 2 went by fine just not as fast as I had hoped but I settled into a pace that seemed maintainable.  I had a nice pick-me-up when the same girl from the bike passed me and told me I rocked the ride.  Then 3 or 4 other guys around said the same thing - congratulating me on a great ride.  I hadn't thought my ride was that spectacular but it felt really good to have these athletes go out of their way to say something to me - thank you:) My pace picked up after that and I felt fairly light-footed going up the hill.  The first out and back I was able to see pro friend Beth and say hi, wave to the always smiling teamie Katie B. and see some other friendly faces.  PIC and I low-fived and I figured she would catch me at around the halfway mark.

My tummy issues hadn't resolved so I was just managing.  There was 1 porta-potty stop.  When I felt good, I tried to pick up the pace. If I started to feel bad, I would slow just a bit to see if it would pass.  I had a big cramp that hit about mile 9 and I dealt with that the same way.....slow down, don't stop, breathe into it and let it release.  By mile 10 it was gone and I was able to really run the downhill into town.  This stretch was awesome despite the cramp since I was able to see lots of the Colorado contingent on the run - Keith, Peter, Randi, Kirsten, Justin and many others!  It's always a lift to see your friends.
Finally at mile 12 I heard footsteps behind me.  A quick glance to the side and I saw red - PIC was there!  Yippee!!!  I was in another low point and struggling just a bit but she (as always) had some very encouraging words.  She told me to be tough and keep fighting and then made sure I had heard her.  This was exactly what I needed.  Michael confirmed that I was leading the age group when I passed him but he made it sound like second place was a bit closer that I was comfortable with and that she was running 1:30 faster per mile.  Uh oh.  Down the hill to the turnaround, up the hill to start loop 2.  Where was the aid station?  I need aid!!  For some reason there wasn't an aid station at mile 13 and it was getting warm.  I had ditched my hand bottle (it was now warm and gross) and needed something wet and cold.  Crap....this could be a problem. Approaching the aid station I made a quick deal with myself - I could walk this station and take in as much as I could and start running again right away. 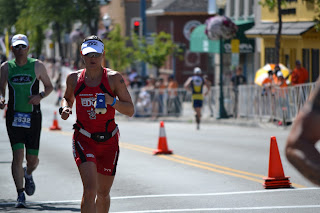 I wish I could say that that was the only aid station I walked but it wasn't, I walked another 2.  There was also one more porta-potty stop.  I now had 6 miles left and I was determined to run to the finish.  And any smiling that I was doing was pretty much done now. There was the business of finishing to contend with. The counting down of miles and minutes started....5 miles left I can run that far.  3 miles left, you are almost done.  My quads up to this point were sore and getting more sore by the mile and with just 3 miles left they had had enough.  They started seizing up on me but I saw the 24 mile sign.  Just keep running.  It's amazing the tunnel vision that happens those last few miles.  The pain for me was just about unbearable but all I could think about was the finish line.  I know people were cheering for me and I just needed to finish.  The final stretch is really really really long, my watch had clicked 26 miles before the turn and I'm sure it was more than .2 to the finish.  But there it was.  Finally. The huge bottle of Perform, the carpet, Mike Reilly saying my name, and the finish line.  I slapped some hands, smiled, clapped and celebrated my finish!! 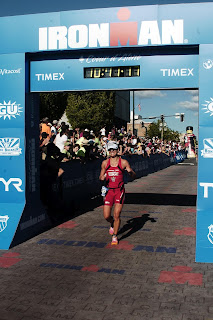 And then I came to a stop and thankfully the catchers were right there because my legs basically gave me a big middle finger and said that they had enough.  I was sort of coherent and when asked whether I wanted food or medical I went to med.  They laid me out on a lawn chair and took care of me.  Since I had peed at mile 14 I really didn't need a bag so they wrapped me up, iced my legs and brought me broth.  Big brother Anthony was there as well and we sat together and talked - it was awesome.  Then PIC found me and we had our reunion:) 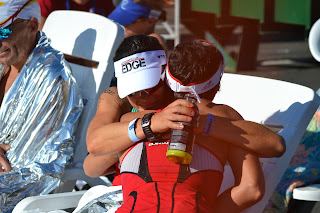 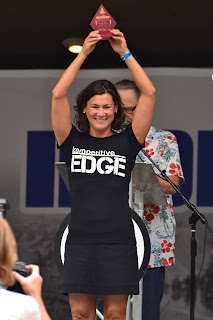 So, I'm going back to Kona!!! A huge thanks to my sponsors and my coach and my family (my main supporters/sponsor).   Coach (the Dirkinator) laid out the plan to get here and I committed to it whole-heartedly. Kompetitive Edge always has my back - fixing my bike, getting me what I need to keep training, and generally taking care of me:)  Ron at Punk Rock Racing is da bomb!

Congratulations Michelle! You and Sonja are such inspirations for me. You both are kicking some butt! Keep up the awesome work.

What a strong race and a strong finish! Love the photo of you coming down the final stretch. Hurts so good!!!!! :-) Congrats again Michelle!