What a cool weekend!

The girls both joined the Parker cross country team for the fall.  And as a swimmer growing up and witnessing the length of the track meets in the spring - well, I was a bit worried that they would take all day.  Like a swim meet.  Or a track meet.  So I got the Dirkinator's permission to switch Saturday's long swim/bike session to Sunday cuz even if it does last all day.....I'm not missing the first cross country meet!  Or any of their meets for that matter.
This meet was in Brighton, a mere 45 minute drive from the house.  We got there at 9:30 and the first race was at 10 - and it was on time!  Charlotte was in the first heat for the 7-8's.  She's been a bit reluctant to run with the club for the last week.....she doesn't like to be in the back of the group!  Yes, maybe a little bit competitive.  So I was hoping that this race with kids her own age would re-kindle her spirit.  All the little kids lined up and Charlotte was right up front, a whistle blew and they all sprinted off!!

Next up was Isabelle in the 9-10's.  She lined up a bit back and she was very nervous!  Same mass start and there were so many kids I missed getting her picture at the start.
The meet was over quick!  Just a few races and that was that.  Charlotte did fantastic - 3rd female and 7th overall (I think) in her age group.  The kid ran a 7:40 mile - at 7 years old.  She is so fired up that she's ready to run again at practice.  Phew!  Isabelle also did great - she's not quite as fast as her little sister but she really liked the race.  So success all around! 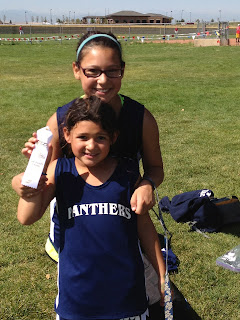 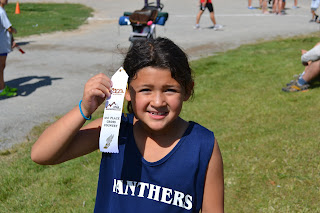 So after all that fun-ness, it was time for me to get down to bid-ness. (haha) It was time for me to get my long, last ride in before Kona!  A swim first, then a 6 hour bike.  Oy.  I considered inviting friends, acquaintances, strange people on the street but then I just decided to suck it up.  Do the ride alone.  I'll be alone in Kona (well, with 1799 of my triathlete buddies), not talking to anyone, providing my own entertainment, conversation, songs.  Plus, it was my Last. Long. Ride.  Just get it done!  I left from my house and headed south.  I was curious how far I could go before having to turn around and if I could make it to Palmer Lake.  How far is it to Palmer Lake anyway?

This route is just gorgeous.  The first part through Castle Rock is OK but after the climb up Wolfsenberger (also pretty cool) and then the decent down the other side, you hit Perry Park Road which winds along the foothills.  I was surrounded by beautiful trees, a crystal clear blue sky, rock formations - just an "easy on the eyes" type of ride.  Some of the ride was without tunes, some of it with tunes, sometimes I just sang out loud.  I drank.  I ate.  And I made it to Palmer Lake - 48.8 miles from my house! 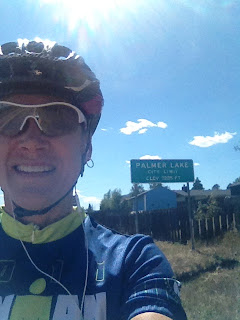 And at an elevation of 7,200 feet, what goes up must go back down, or home.  Even with a headwind, it was a pretty quick decent.  I made it back to Castle Rock right when I expected and as I pulled into my re-fueling stop, I realized I was HUNGRY!  I made it back just before what clearly would have been an epic bonk!

After that stop, and with the help of caffeine and sugar, and the Madonna station on Pandora, I sang and danced my way home.  With the mileage so close to 100 though, I ended up doing some neighborhood laps and pulled in my driveway at 100.1.  Awesome!
Posted by Michelle at 9:05 PM

I love every single thing about this post, especially the CC meet :-)