Or the St. George race report.  You choose the title!  To be fair, this is the second time around that I am writing this report.  I was about to hit "publish" on the last one when Blogger decided it wasn't fit for public reading.  Whatever blogger - I'll get this thing done.  You watch me.  Better late than never I suppose.

Why call this report Obstacles?  That is the only way to describe the lead-up to St. George.  April threw all sorts of fun things my way and did its very best to derail my training and race prep.  How did that happen?  It started with an awesome trip to Hawaii with my girls and my parents.  We had such a great trip until I went crash boom on my bike on the West Maui Loop one morning.  Not a huge fall but enough to mess up my elbow and shoulder a bit and give my hip a fantastically big bruise (looking great in a swimsuit).  No biggie right?  Yes, until I woke up the next morning incredibly sore and now sick.  I had a cold and cough.  In Hawaii.  On vacation.  Drat.

I did what was only sensible at that point, and that was to lay low and drink Mai Tais.  Cut off training, sleep, and do as much with the kiddos as possible.  By the end of the trip I was feeling much more like myself.  Phew!  Since as soon as we got back I had a quick turnaround to training camp in San Jose.  I was so excited for training camp - time with Coach, lots of time with PIC, meeting new peeps and getting in lots of training!

A day and a half and a swim, bike, run later my tummy decided it would be best to expel all contents violently.  Seriously, I had to have PIC pull over so I could vomit in the bushes of some auto parts store.  Ewwwwww.  OK, I tried to convince myself that I would be fine the next morning and would be ready to roll for epic climb day.  But, I got worse through the night - you know the drill, coming out both ends and a fever.  The only bonus was that we were staying at PIC's parents house so I had a mama there to take care of me (THANK YOU HELEN).

Yea, so really kind of a not ideal lead up to St. George.  It was definitely not how I wanted to go into the race.  It's always better to feel confident rather than oh dear what are we going to have race day?  But then again, you can always be fit and confident on race day and things will still not go your way (refer to last year's Kona report).  So I had these obstacles that I had to jump around and over and crawl under to get me to the start line. And it was the start line for my inaugural race in my new age group!  (seriously, I'm in 45-49 now?  WTF?) Was I happy about it?  No.  I was mad.  I felt sorry for myself.  I thought maybe I shouldn't race.  But then that other side of me took over.  so what?  Not feelng ready?  You can still swim 1.2 miles.  You can bike 56 even with the hills.  And I was pretty sure I could pull off a half marathon.  I would rather go and give it my best shot than lay down in my bed and give up.  You see, I kinda love this sport.  In fact, I really dig it.  I love the athletes.  I love the races.  I love the camaraderie.  I love having to go to that place.....you know the one.  Where you have to dig deep and see how mentally tough you can be.  So with a little help from Coach, PIC and my family, I went ahead and made the drive to St. George.

And the drive??  That was fun!  PIC and I talked and sang for like 9 hours straight.  The trip took a little longer than planned since we had to keep pulling over to pee.  Nothing like 2 well hydrated athletes to make a road trip even longer:)  But it is an awesome drive.  The scenery in Utah is gorgeous and I had a feeling we were in for a really beautiful course.

Pre Race
Let's get on with this race report already!  Everything was going hunky dory leading up to the race.  We settled in to our great little motel which happened to be a mere 2 blocks from the expo and finish line - SCORE.  The prep was going great until I found out that my mom was going to have surgery on Saturday morning (race morning).  A surgery that was unplanned and unexpected.  Ummmmm......no.  Not good.  I wanted to go home.  Forget the race I want to be with my mama.  But my family said no, don't come home.  Race since there is nothing you can do here but sit around and wait.  Ugghhhh.  Yet another obstacle for me to deal with going into the race.  After some tears and serious thinking, I stayed and decided to race for mom.  It actually felt good to have someone to race for and I knew I could be strong for her.

Swim
Yay!  Race day!!  Well, my tummy wasn't really into it.  I managed to get in some food but just felt unsettled.  I had a long time to wait until my wave and finally it was time to get suited up and lined up.  We were off and I told myself to settle in and see what kind of a swim I could pull off.  But, no.  I just wasn't comfortable. The water was cold (60-ish) and even though it was beautifully clear, I couldn't find a rhythm.  I felt somewhat weird in the water and was having some CDA flashbacks of my panic attack.  Another orange cap was now beside me so I just focused on swimming with her.  But my breathing never felt right and it was somewhat of an unnatural swim for me.  The other orange cap pulled away from me at the last turn buoy when I got caught up in some traffic and had to completely stop to get around.  But the swim was over - I was pretty sure I was 3rd out of the water.  Meh.

T1
I love wetsuit strippers.  That is all.

Bike
My goal for the bike was just to set a good steady pace for the entire ride.  A pace that was manageable that would get me to T2 in good shape.  I wasn't planning on blowing this ride out, I just need to be even and steady and get me to the run.  Especially since there was a wicked climb at mile 40.  The course was everything that was promised - gorgeous scenery, difficult climbs and what I wasn't expecting - screaming descents that were long and straight so you could really get moving.  My new bike, Hot Tamale, (QR Ilicito) loves going downhill and loves doing it fast.  Oh my - that was fun!!  My nutrition was still off and I knew I wasn't taking in the calories I needed but everything was going smooth so far.  There was lots of traffic since I was in a later wave and I had to yell lots to get people to move over (seriously peeps, stay right!!).  The ride was uneventful and I really enjoyed it!  My legs didn't feel too taxed at the end so I figured I had set myself up pretty good to run.  Of course, at mile 40 I realized I was way under my calorie goal so I just started stuffing food into my face in hopes that I wasn't too far in the hole.

T2
Legs felt good initially going into transition and I didn't remember anyone in my age group passing me on the bike.  And there were no bikes in my rack so I figured I was 1st or 2nd in.....hmmmmmm.

Run
Well, I thought my legs felt good.  In fact, as I was running out of T2 I had to look down to make sure there weren't actually 25lb weights attached to each leg.  They were incredibly heavy and my calves and achilles were screaming tight.  Ok, Ok, give them a chance to loosen up.  But the first 4 miles of this run are UPHILL (no joke) and there was no way they could loosen up on an uphill.  At this point I was moving along at what can only be described as a snail's pace.  I thought that this was going to be the LONGEST half marathon of my life.  I stopped at the aid station.  I went to the port-a-potty.  I talked to the volunteers.  Might as well make this as enjoyable as possible.  I started making little deals with myself....run (hobble) to that bush up there and then you can stretch your calves.  At this point I was passed by my teammate and fellow age group athlete Teri.  She looked a lot like a gazelle and made running uphill look impossibly easy.  I was jealous envious.  I told her to go for it.   And then the strangest thing happened.  We hit a mini downhill before the next climb and my calves loosened up enough for me to get some running going.  I would catch Teri on the downhills and she would crush me on the ups.  But I kept her in my sights.  At the aid station at mile 9 (I think), she stopped and I knew that if I was going to give this a go......it was now.  I ran through the aid station and up the next hill.  Then it was glorious downhill and I was running harder than I have ever run downhill.  All I had to do was keep this up for a couple of miles because I knew she was on my heels.  I was focused and hurting - coke was fueling my run so far and I was pretty sure I was going on fumes now.  But this was for my mom.  If I could be strong now, I knew that she was being strong.  And that's what kept me going.  Finally, I hit the turn-y thing-y and there were 2 glorious downhill blocks to the finish.

St. George - you guys can seriously put on a great race.  Those last 2 blocks were fantastic and made me feel a little bit like a rock star!!  The volunteers and supporters were absolutely great.  I crossed that finish line with a huge smile on my face - that's the way to start a season!  Now I just needed to get to a phone so I could make sure mom was OK. Along the way, I checked results and found out I had indeed finished first in my new age group.  (45-49 really??)  And I was so glad that I just got over my big bad self, let go of expectation and just raced for the pure joy of it.  Reminds me of a quote.. 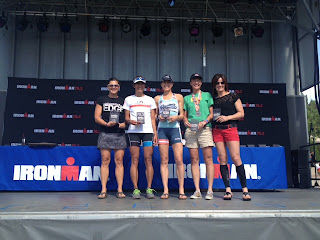 So I am in the midst of my next training block and there have been minor obstacles.  And hopefully everything will go smoothly leading into Honu.  But if not, I have learned that you really just have to do what you love doing.  Change your path if needed.  Take care of yourself and those you love.  Erase all expectation and race with a smile.  Not a bad way to race and not a bad approach to life too:)

WOW, awesome race and win! Way to overcome all those obstacles.

So proud of you PIC. The win is awesome but the lessons you learned about persevering and changing your own attitude are the real treats of this win.