The weather was decent on Day 4.  No sun but not pouring down rain.  All was well except for my horrible eating on Day 3.  Why oh why did I think a cheeseburger and duck confit would be a good eatng plan???  Well the tummy was not happy (SHUTUPTUMMY).  I figured it may be a pull over and barf kind of day and my dreams of a 30minute ascent of Alpe d’Huez was dashed.
We began the descent from La Grave to Bourg d’Oisans (base of alpe) and had my first tunnel experiences on a bike.  Let me just say I do not like tunnels on a bike.  They are narrow, dark and any car that enters the tunnel sounds just like a Mack truck roaring up behind you.  And then it passes you and it is a teeny tiny Fiat.  Oye.

My legs were NOT happy either (SHUTUPLEGS).  The first little climb felt awful and I figured another long day in the saddle.  But hey, I’m riding my bike (OK, A bike) in France.  Suck it up buttercup – when will you get to do this again?  Despite the pissy tummy and legs, I was still excited to do this iconic climb.

The group gathered at the base of the climb and got suited up.  Guide Lisa was driving the van today and was getting everyone fired up with music and a generally awesome attitude.  And then it was time to begin.

Laura Lee and Lisa had both warned us that the first 3 switchbacks were the steepest and that is where you usually see the most carnage.  So take it easy.  And, there are not 21 switchbacks.  Most people stop right when they hit the town at the top – there are all sorts of “fake ” finish lines.  But the TDF finish line happens after switchback 0 (thus 22).

The road immediately turns up and you are climbing.  I had my bike in my lowest gear and it stayed there the remainder of the ascent.  Climbing was a combination of in the saddle and out of the saddle and yes, those first 3 switchbacks were a beotch.  Since my tummy was gross and I knew I wasn’t going to win the ascent, I lowered my heart rate targets and just kept a somewhat “comfortable” pace going up.

The climb is stunning.  Absolutely gorgeous.  And unlike the other climbs we had done, this one had marker signs for each switchback counting down.  So the first sign was 21 and the grade for that section was like 22%.  Or 10%.  I don’t really remember.  I got in a groove and started counting down signs.  And then I would argue with whoever did the signs when I thought for sure that counted as a switchback yet there was no sign.

The coolest part of the climb?  Well, there are several.  Starting with seeing the names of your favorite dopers riders painted all over the road.  The next was seeing all of the people out there on their bikes!  I thought I was doing great passing people until I would look over and see that the girl I was passing was 12.  On a mountain bike.  And then there was the 80 year old man on a fixie.  I am not kidding.  I had been passed by an 8 year old boy at some point who must have had a 36 on his rear derailleur the way he was spinning his legs.  He stopped at the first “finish” line he saw.  I smiled as I passed him back and knew that I had just crushed the 8 year old.  HA!!!!  I cruised through the village, hit the right turn at Intersport, nailed the first roundabout and then promptly missed the next roundabout.  I ended up with Daniel (fellow tour member and hilarious Brit) at the golf course.  We were pretty certain that it wasn’t the finish line.  So we turned back and finally got to the finish.  Pretty fucking awesome.

After taking off the time for the missed turn, the 4 flat tires, the guy that needed CPR and the 9 holes of golf I played, my “official” time came in around 10minutes.  Take that Lance!!! 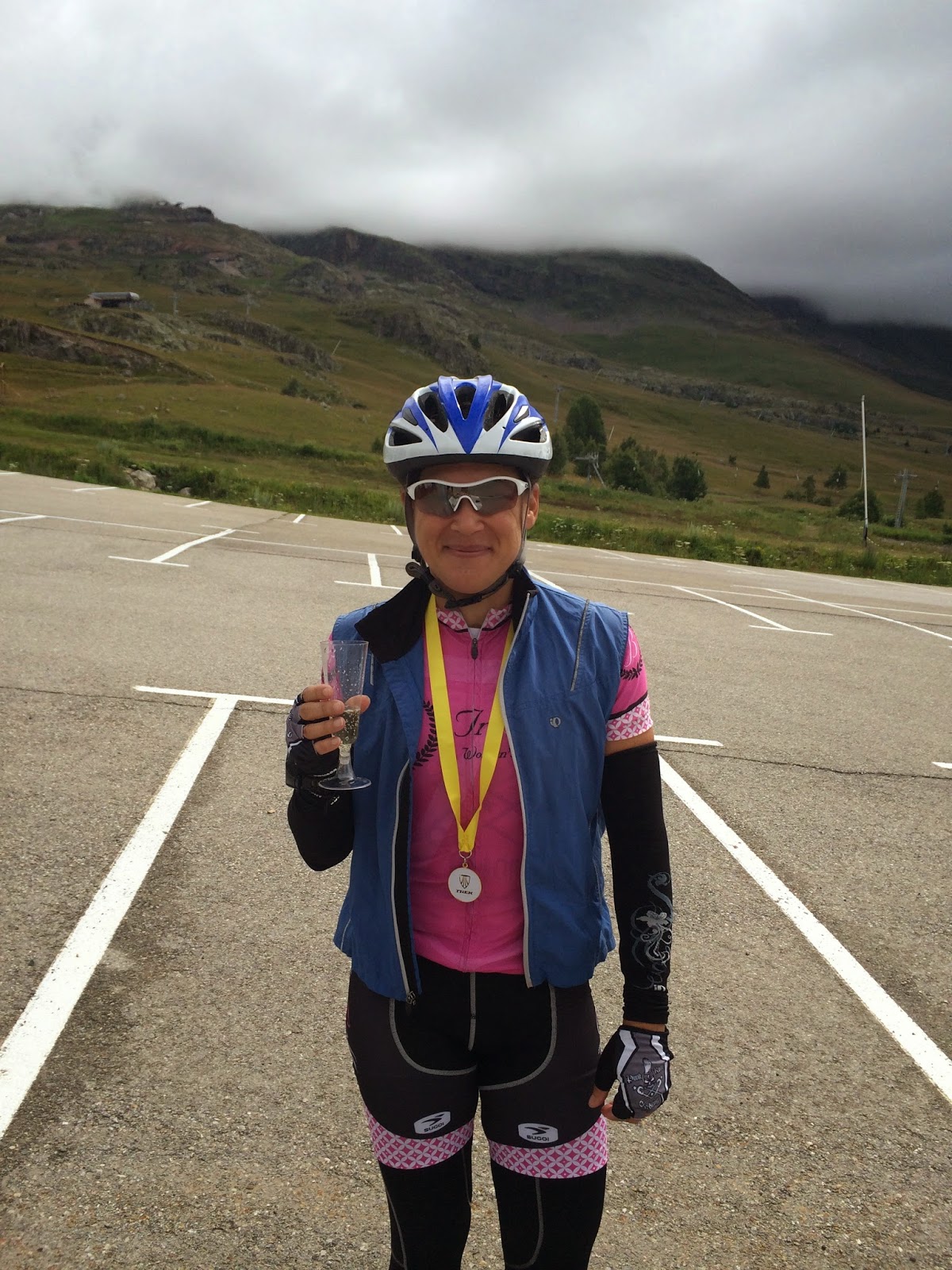 Lisa was waiting at the top with champagne and a medal!!! My first medal of the year –so excited!
Dad nailed the climb at age 70 – just 10 minutes slower than what he did 10 years ago.  Nice.  Nicole made it up too.  So proud!!!

The rest of the day?  A very long lunch at the top, some shopping and then time to finish up the ride.  With a bitch of a climb up Col de Sarenne (8-9% average grade over 5k) and then a death defying descent down the back.  Yea, that wasn’t fun.  Skinny road covered with gravel and drops off the side.  My hands hurt after that.  Then one more climb back to La Grave after that and we finally made it back to L’Edelweiss.

Glad you are having fun AND blogging
happy bday to dad!